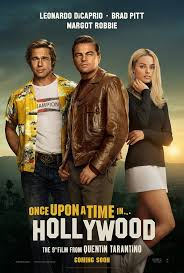 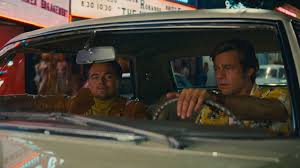 AUDIO PODCAST OPTION OF ONCE UPON A TIME IN HOLLYWOOD REVIEW

A classically Tarentino revisionist history of a terrible event during the 1960’s seen through the prism of a fading TV star and his stunt double in an intricately detailed and brain shockingly familiar re-creation of the 1960’s.

ADULTS! ONLY ADULTS! And only adults who have fairly strong constitutions. While there really are no sex scenes, the language is frequently raw and occasionally vulgar topics are discussed in crude ways, but there are a few fight scenes and one long scene of extremely gory and prolonged violence.

Allow me to begin this review by quoting GK Chesterton:

Reviewing this movie puts me in an awkward position for a number of reasons. For one, it is a typically Tarentino violent and sexually charged film but one I thought extremely well done and worth viewing. For another I don’t want to unduly spoil anything in the movie but need to set the stage for one of the most vile moments in American history without either scaring off prospective appropriate film goers or giving away too much.

So keeping all this in mind:

There’s a YouTube show called How it Should Have Ended, a PG if not G-rated comedy, which points out inconsistencies, crosses universe franchise storylines, and evaluates any plot flaws in movies which rely on nonsensical stupidity to set up the premise or move the story along. 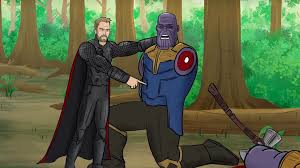 They animate scenes and do very credible voice impersonations showing, for better or worse, what is likely to have really happened had common sense prevailed in a given situation.

For examples, they: point out how a man as smart as Doctor Strange would not have texted on a winding road, going super fast, in the dark, but would have hung up the phone and planned to call later; demonstrate how Iron Man’s quicker, lighter and faster suit, along with his flying experience would have easily defeated Obadiah Stane at the end of Iron Man; introduced Wolverine to assist  Wonder Woman; clearly showed in a spoof of the theme song from Beauty and the Beast that Belle was a victim of Stockholm Syndrome; and exhibit how Mr. Incredible probably would have loved Syndrome’s childhood inventions instead of shunning him with far more positive results.

Similarly, Once Upon a Time in Hollywood is aptly named, for it is a fairy tale, if you consider, as Joe Harper did in Kenneth Branagh’s A Midwinter’s Tale that “most fairy tales turn out to be nightmares”, which explores the alternate possibilities in life.

Leonardo DiCaprio plays the fictitious fading star Rick Dalton, a composite of every little known ’60’s TV show one trick pony and Brad Pitt is his best friend and stunt double Cliff Booth (based loosely on Burt Reynold’s stunt double Hal Needham). Where Rick is a fragile bag of regrets and insecurities off camera, Rick exudes a tough cowboy presence 24/7. 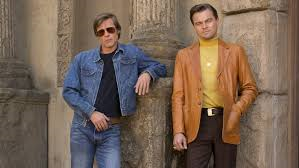 Likely the best acting job of either DiCaprio or Pitt, and almost the only two people who do not play historically documentable figures, they avoid what easily could have been caricatures to create two very different but vulnerable men who are survivors at their core. Despite the background story, their downwardly spiraling respective careers and the omnipresent spectre of the looming profoundly malevolent event on the horizon, dreadful to anticipate for anyone familiar with this year, these two archetype examples of crank-’em-out TV show stars from the ’60’s manage to be likeable, interesting, relatable, appealing and, like yeast in a barrel of flour, lighten the mood of every scene they are in.

This is a very “META” concept outing – with actors portraying real people who portrayed characters in movies and TV shows similar to the ones being filmed withIN the confines of Once Upon a Time in Hollywood. Whew.

The acting of the supporting cast, most of whom do play real people, is terrific. Among a large cast: 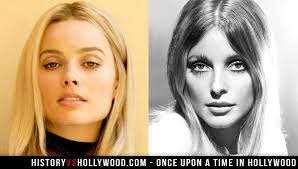 Margot Robbie is the sweet and gentle but vacuous Sharon Tate. Dakota Fanning does a gut clenching quietly evil rendition of Manson follower Squeaky Fromme. And 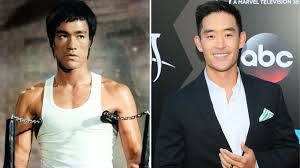 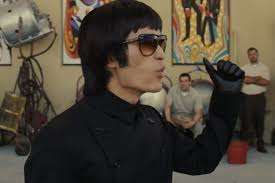 Bruce Lee caricature (for which his surviving daughter, Shannon Lee, has taken exception). But one of the most impressive was 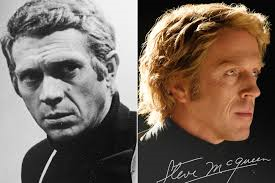 Damien Lewis’ Steve MacQueen (The Great Escape, The Thomas Crown Affair). With just his voice and gestures he brings this cinema icon back to life for just a few wonderful movie moments.

In addition, there are some wonderful cameos from 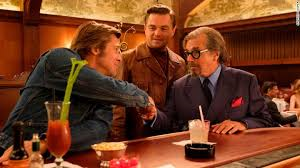 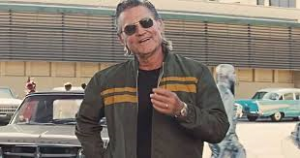 Kurt Russell (from Disney’s 1969’s Computer Wore Tennis Shoes to Snake Plissken in Escape From New York) who has a small part as stunt coordinator Randy and provides some V.O. narration, and Bruce Dern (1972’s eco-warning sci fi Silent Running), actors whose careers were pretty much “born” during this period of time. 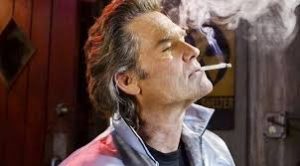 And then there are little Easter Eggs that you might miss unless you look closely, like Mama Cass from the Mamas and the Papas who greets Tate at the Playboy Mansion, and someone who can only be Twiggy talking to Steve MacQueen. NOT to mention the resurrection of the old TV show Lancer, including Wayne Maunder (portrayed by Luke Perry) and cigarette commercials which are startlingly accurate dopplegangers to the ones we watched on TV as kids. 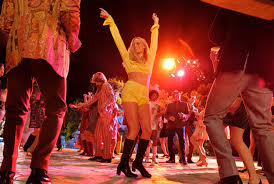 The songs are beautifully handpicked for the right moments like bouquets placed around a professionally decorated room featuring the likes of: “Good Thing” from Paul Revere and the Raiders, Neil Diamond’s “Brother Love’s Traveling Salvation Show”, and “California Dreamin'” by Jose Feliciano. 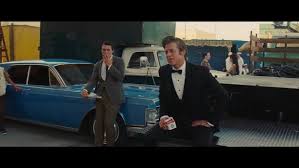 And the sets, pacing of interviews, acting styles of the actors as they performed the shows within the movie, costumes, blunt and awkward dialogue all open a portal into a world I have not experienced in more than half a century. It was jarringly realistic. 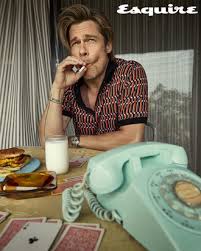 Tarantino even cleverly placed throughout the movie the awkward and jerky edits often experienced in watching a show from my youth, as the more humble equipment just did not produce the smoother transitions we all demand today, subtly evoking that era, as well as reminding us this is all just a fantasy, a wishful thinking creation of a cinematic mind.

If he has done nothing else, Tarantino has done a stunning job of disabusing me of any temptations to nostalgia for the era in his pinpoint accurate recreation of the world in which I grew up – the ’60’s with its emphasis on: 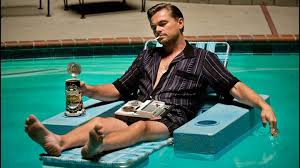 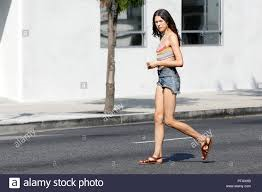 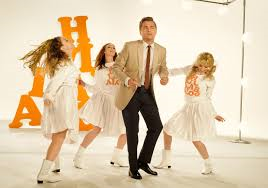 terrible TV shows, black and white monitors with Vietnam in the background, and condescending talking heads masquerading as newscasters (OK we still have those). 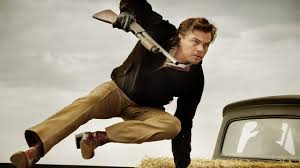 Don’t get me wrong. I loved it while I was living it but in the stark light of a Tarantino day – let’s just say that walks down Memory Lane should be taken sparingly.

And then there is the specific history of that particular “moment” in time.

In order to appreciate the pervasive sense of suspense and anxiety that hangs over the entire movie, you have to understand the backdrop in which the story plays out. 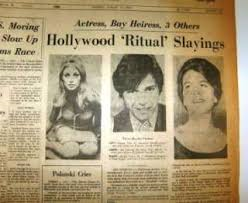 The movie takes place during the year preceding the slaughter of Sharon Tate, her baby and guests on the night of August 9th 1969. On that terrible night, a cult leader name Charles Manson sent his followers out to kill everyone in the house on Cielo Drive. The people there were not just murdered they were savaged. A pregnant Sharon Tate, two weeks from delivery, was hung up and butchered like cattle. The rest were bludgeoned, shot, and stabbed dozens of times. Anyone old enough or well read enough to be familiar with this event knows it is coming — and protagonist Rick lives next door.

The next day, before their capture, Manson and his hippies did the same to a couple named LaBianca. It is hard to appreciate how this atmosphere of evil informed those days unless you lived through it…or watched this movie. 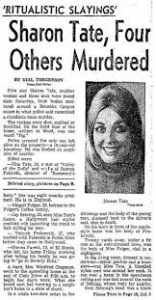 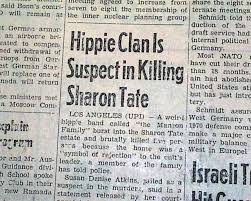 replacing the open door “love is in the air” perception of the flower child with the reality that these people engaged in highly dysfunctional and destructive behaviors, who were predominantly a danger to themselves and those around them.

In OUATIH we get the true face of the hippie, free-love, Flower Power movement: 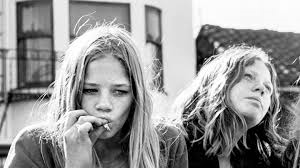 promiscuous, selfish, manipulative, filthy, violent, arrogant, condescending, narcissistic, slothful, parasitic, hypocritical, self-adoring, drug addicted anarchists with a sense of entitlement to other people’s property. The greatest horror to those who stylistically aligned themselves with these pet anti-establishment philosophies (while living otherwise) was that the Manson cult demonstrated to the world merely the logical extrapolation of the 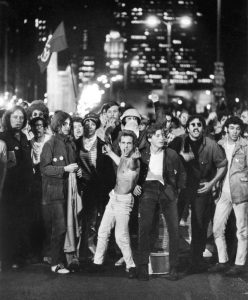 hippie mantras which included calling police names and advocating their destruction, extreme hostility to capitalism while living off the work of others,  and engagement in sexual debauchery without accepting consequences. 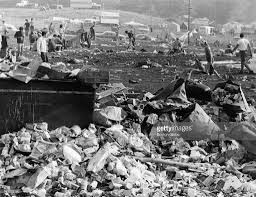 The aftermath of Woodstock alone demonstrates it takes a lot of someone else’s effort and money for one to appear to be living a life of freedom and independence from the drudgery of actually having to work for a living. (Of course, unfortunately, that is now the Democrat National Party goal – to be living off the hard work of other people, responsibility free – not surprising since many in their leadership fermented out of that intellectual cesspool —— but that’s a post for another day.)

Without any real job they lived, if you can call it that, on the largesse of family,  friends and community, that is when they weren’t begging, prostituting themselves or outright stealing. 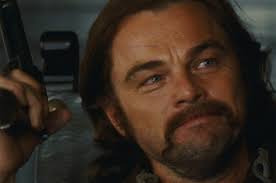 As this is a Tarantino film one expects an extreme amount of violence and gore and OUATIH is no exception…..but not the way you might expect, or cringe fearfully. I am delighted to say that, through the magic of Tarantino pixie dust, I was inspired to clap and cheer during the last scenes.

Tarantino likes to play with “What if’s”. Inglourious Basterds and Django Unchained being his most telling examples. I had actually never seen an entire Tarantino movie before but only clips from the likes of Kill Bill, Hateful Eight and Pulp Fiction. Sudden and ferocious bloodshed tend to jump out like ghouls from a haunted house, but OUAPIH is quite gentle for most of the movie in comparison, as the director manifests more suspense and extreme apprehension than actual violence…until the end.

Also stick around for a funny ending credits scene with a brilliantly on point faux cigarette commercial. 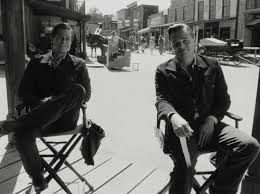 So if you want a head first dive into the deep end of nostalgia, and if you have the stomach for it, this is Tarantino at his best, if for no other reason than his masterful re-invention of a time gone by and for the cathartic satisfaction of seeing justice served in a Tarantino-flavored version of How it Should Have Ended.