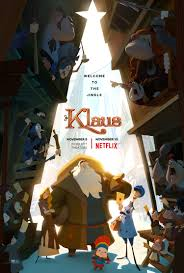 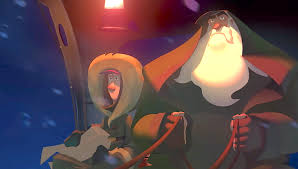 AUDIO OPTION FOR REVIEW OF KLAUS

The animated feature Klaus cleverly and adorably postulates the origins of the Santa Claus story.

Any age, though there are Looney Tunes level scenes of “violence” and some images no scarier then the chef scene in The Little Mermaid, they are all played for laughs even the littlest can enjoy. 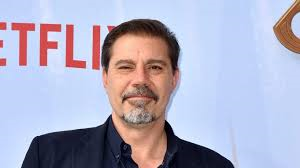 Sergio Pablos (who also lends his voice to two of the more caricature cast members, Pumpkin and Olaf) does either. I think that everything happens for a reason, as directed by the Divine hand of our Creator. The story Mr. Pablos has lovingly crafted during the last two and a half years, addresses one possible explanation of the origins of the Santa Claus story, and demonstrates this purpose-driven theory beautifully.

Klaus is one of five contenders for the best animated feature film Oscar. The others are: Toy Story 4 (SEE REVIEW HERE), Missing Link, I Lost my Body, and How to Train Your Dragon: The Hidden World. I think Klaus should be the hands-down winner.

SPOILERS (THOUGH AS FEW AS I COULD) 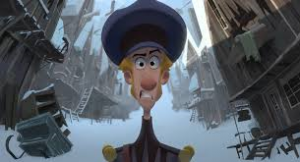 The premise, without giving away too much, is about a spoiled little rich man who is forced to cope on the island of Smeerensburg, in the outer reaches of the north, among members of two feuding families who have made their community a generational war zone. The name “Smeerensburg” was chosen by Pablos, adopted from a city on the outskirts of the northern frontier with the name of Smeerenburg (without the middle “s”) which no longer exists, so is, in a way, itself now a myth. 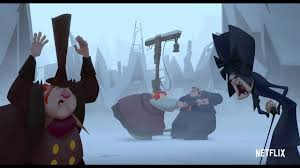 While the violence is played for laughs, the oppressive gray scale, deliberately sharp intimidating ubiquitous icicle motiffs, angular houses and angry denizens make the point. This is not a place you want to stay.

But, unlike I Lost my Body, (which is about a severed hand trying and ultimately failing to reunite with the young man from whom it was cut), Klaus is not unrelentingly grim, dark and navel-mediatingly introspective. Klaus is funny, as animated films really SHOULD be. 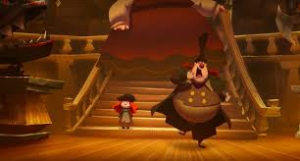 While there is a modicum of slapstick, the humor is mostly from the way people can be amusing just in interacting with each other. The writing in Klaus is warm, smart and clever, creating distinctive personalities amongst the cartoon creations. 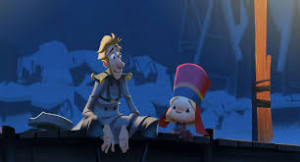 Klaus gives us likeable, interesting people, unlike one of the other Oscar contenders, the (ahem) abominable Missing Link, which latter movie, unsuccessfully relied upon star power and improv to write their failed script. Klaus is often amusingly unrealistic, especially as Jesper confronts obstacles and, of course, survives things that flesh and blood human beings would not. But much like the OLD Bugs Bunny shows, it establishes and follows its own Universal rules while tweaking real world ones. Missing Link, on the other hand, is all over the place, placing characters in “jeopardy” one moment then having them come away unscathed from other worse events.

Klaus, like any good fairy tale, has an ennobling theme repeated several times: “A true act of goodwill always sparks another.” 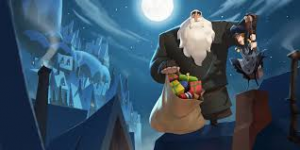 As the movie plays out, the meaning of this phrase expresses itself more deeply – how great good can come from the most unlikely situations, even in the serendipitous meeting between one man suffering from deep grief and another so myopically selfish he can not see the good he is accomplishing, albeit for the wrong reasons. 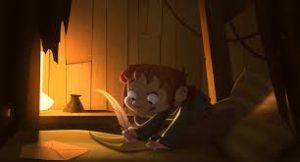 The animation while not 100% state-of-the-art, is solid and updated 2D, often clever and delightfully detailed, reminiscent of the artful Anastasia. In contrast, How to Train Your Dragon has some truly gorgeous visuals and the main characters are as endearing as they were in the first two, BUT the plot to Dragon is thin and really just a slightly mixed rehash of ground already covered. Also, Dragon‘s story is far too padded with superfluous characters inserted for laughs but who just come across as obnoxious. What Klaus lacks in cutting edge visuals, it more than makes up for in well developed characters and a subtly intricate plot. 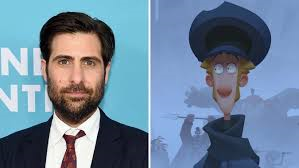 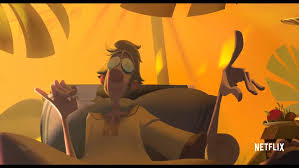 Jesper languishes in prolonged adolescence as an unchallenged, indulged youth but who comes into his own and becomes a mensch in discovering previously untapped and unsuspected wells of determination, ingenuity and altruism.

The soundtrack is light and lovely, and, although not a musical, is sprinkled throughout with catchy background tunes intended to reflect the mood of the moment. 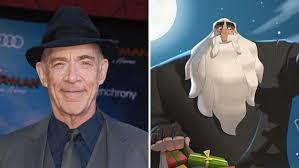 Klaus, the character, is voiced by JK Simmons, who stole scenes as the loud blustery editor in the old Tobey Maguire Spider-Man movies. 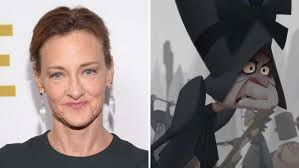 Joan Cusack (sister to and often co-star with John C.),  brings ever-angry Mrs. Krum, (reminding me a bit of a female Yosemite Sam) to life. She is an actress who has graced many lovely movies like: Instant Family (SEE MY REVIEW HERE), Raising Helen, the first Toy Stories, and Martian Child. I do not believe I have ever seen a movie with her in it that I did not at least enjoy her performance. 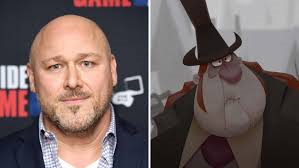 Will Sasso (guest star on The Orville (SEE MY REVIEWS HERE AND HERE)) is the cluelessly combative Mr. Ellingboe. 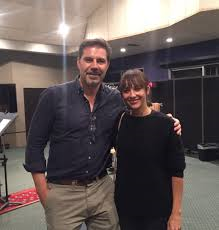 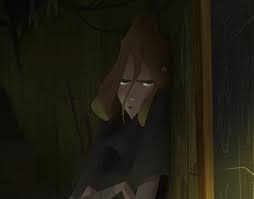 a young woman who idealistically arrived in Smeerensburg 5 years before and has been selling fish to earn enough money for passage out ever since.

Unlike the devastating betrayal of Toy Story 4 (SEE MY REVIEW HERE), which squandered a deep well of talent, creativity and fandom to put an ignominious end to the entire Toy Story franchise, Klaus gives us a story of altruism and family with a theme repeated often: “A true act of good will always sparks another.” This is a much better theme than Toy Story 4‘s pathetic rationalization for men who abandon their families and responsibilities for the shallow pursuit of their own selfish desires, in order to “follow their heart”. (gag me with a SPOON!) 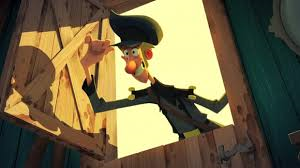 Klaus, in contrast, harkens back to It’s a Wonderful Life, where one man, DYING to himself (instead of indulging himself) every day can impact so many lives, even if they do not anticipate or understand what they are doing while it is happening.

So while other films may have more money, tech, star power, or a franchise to back them up, Klaus more than outshines them all in superlative storytelling, characterization, theme, heart and … true acts of good will. Regardless of whether Oscar recognizes this or not, Klaus is the true winner. 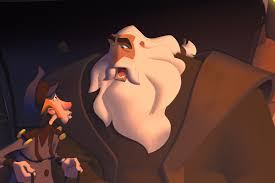