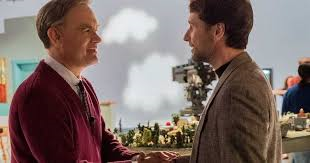 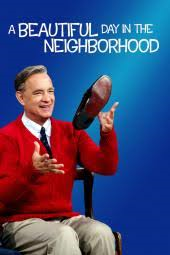 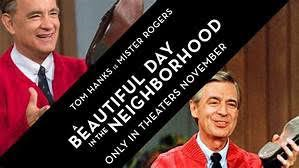 Jesus, in Matthew 22:39, when asked what the Greatest Commandment was, replied that it was to love God with your whole mind, soul and strength then added that the Second was like the first: To love your neighbor as yourself. And I can think of few men whose lives have better served as a template for following these instructions than Mr. Fred Rogers.

A Beautiful Day in the Neighborhood, contrary to what you might think, is not about the life of Fred McFeeley (yes that’s his real middle name) Rogers. If you want to learn more about Mr. Rogers’ biography you can watch the wonderful documentary on him 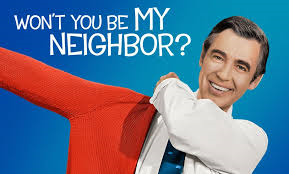 Won’t You be My Neighbor? (READ MY REVIEW OF THAT HERE) 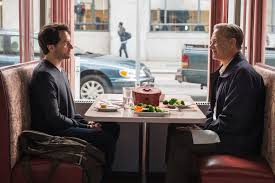 A Beautiful Day in the Neighborhood is less about the life of the man than the effect his life had on others. Mr. Rogers began his show to teach children appropriate and healthy ways to deal with feelings – especially negative feelings: hurt, envy, anger, betrayal, loss. When children do not learn to deal with their dark parts they become adults who do not deal well with them either. And while the show successfully managed that in a way no other show even tried, Mr. Rogers’ Neighborhood and A Beautiful Day in the Neighborhood is about so much more. 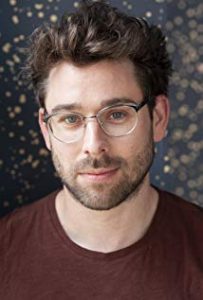 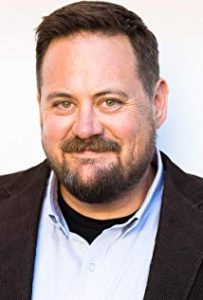 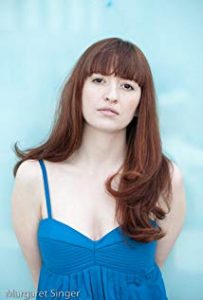 Marielle Heller (sister to composer Nate mentioned below) of A Beautiful Day in the Neighborhood made some bold choices I had not expected. The movie starts as though you were watching the old children’s show 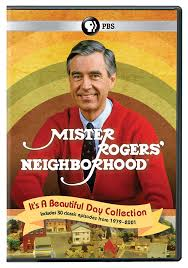 Mr. Rogers’ Neighborhood – with the spritely theme song, models of moving trolleys (and a plot appropriate addition of a flying toy plane), filmed in the period slightly fuzzy television low definition we grew up with, followed by Mr. Rogers’ appearance to sing his song, 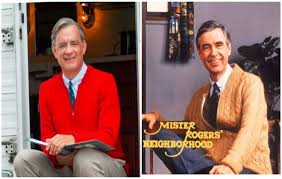 change from his jacket to a sweater and explain what the day’s show is to be about. In this case, he uses a picture board, opening little hand-made doors to remind us of a few of the show’s regulars: Lady Aberlin, King Friday the 13th, etc. He then reveals an uncharacteristically ugly photo of a bewildered and injured man who Mr. Rogers refers to as his friend Lloyd (Matthew Rhys).

As the movie segues into a more conventional format, we soon find out that 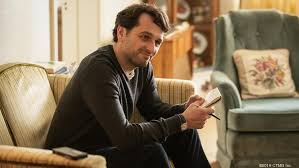 Lloyd Voger (Matthew Rhys who is actually Welsh doing a fabulously authentic American accent) is an  ambush journalist who has been assigned a “fluff” piece on Mr. Rogers by his concerned boss Ellen 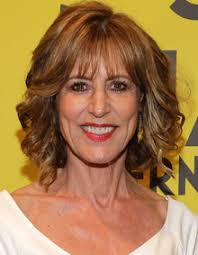 (Christine Lahti – a former Blacklist frequent guest star) who believes Lloyd has alienated a few too many people and that this will soften his image. Suffice it to say Lloyd has issues with this assignment, himself, 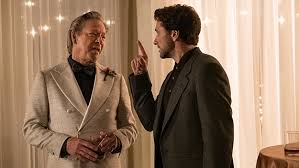 the world and life in general.

Although there is no real Lloyd, he is a composite and representative of the children of all ages who were aided by the gentle ministry of Mr. Rogers. The story was inspired by the existence of an anecdotal article about Fred Rogers written by Tom Junod for Esquire magazine in November 1998 called “Can You Say…Hero?” 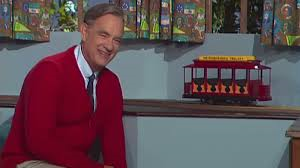 The show within the movie even includes Mr. Rogers’ break of the fourth wall as he gazes directly and kindly at the camera in a stare both penetrating and non-threatening, the way your grandfather might encourage you to be completely honest with him about some problem you were having. Mr. Rogers used this technique to let children know that he was interested in each of them. And this wasn’t just a gimmick. When he met someone face to face he genuinely gave them his full and undivided attention in a way few people will or can. Hanks recreates this beautifully, making the audience members feel included in a personal comforting way. 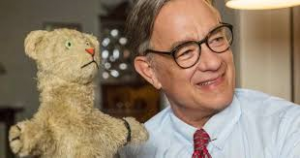 The acting is Oscar worthy (at least measured against a time when the Oscars meant something). Tom Hanks (whose astonishing filmography ranges from the goofy adorable 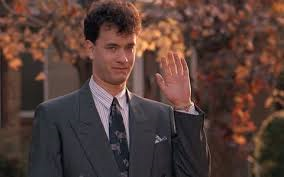 Big to the mesmerizing 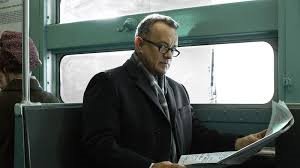 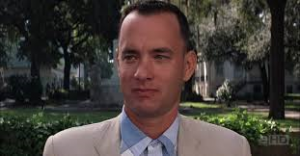 Forrest Gump AND the voice of 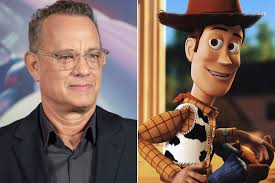 Woody from the Toy Story franchise) has the look, nuance and gestures of Mr. Rogers spot on – every hesitation, the warm genuine smile, the playful shoe toss, the kind but perceptively intense gaze, 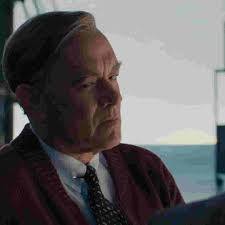 the ingenuous attitude which masks the sharp analytical mind searching for a way to help that you don’t even realize you need. 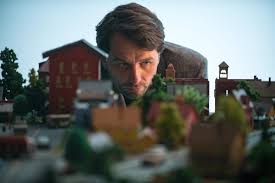 Rhys gives a heartbreaking performance as an emotionally crippled man whose arc propels the narrative of the story. 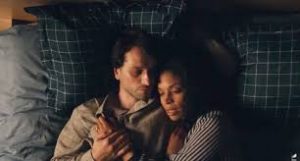 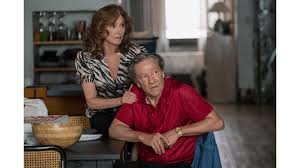 Chris Cooper (whose resume includes everything from The Tempest to the Muppets and the Bourne franchise) does a solid job as Lloyd’s father, Jerry, with whom Lloyd has a complex and strained relationship.

The cinematography is extremely effective telling a subtext of the story by itself. The cameras employed for the scenes which recreate the shooting of the Mr. Rogers’ Neighborhood show are the same kind of cameras originally used for the real thing. 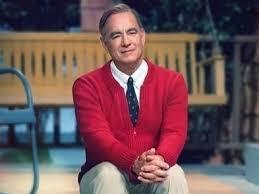 The studio they filmed those Mr. Rogers Neighborhood recreated scenes were the original ones used in Philadelphia for the real show. This creates a nostalgic feel to those segments of the movie, especially as shots of

Lloyd during cuts to him even in the same scenes, use a digital camera. This provide a notable visual contrast between the two men and the way they perceive the world: 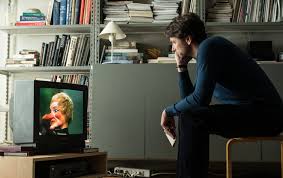 Mr. Rogers – through the gentle softer lens of a children’s show, versus Lloyd’s harsher view of the world and the people around him. It is this kind of thoughtful subtlety which makes A Beautiful Day in the Neighborhood so deeply effecting as both a story and parable.

The music is both soundtrack (by Nate Heller – Can You Ever Forgive Me?) woven about the Mr. Rogers’ theme music and an eclectic collection of lovely songs which you would likely have come across as you cruised the radio dial from the 1970’s to 1990’s: “Northern Sky” by Nick Drake, “Road to Find Out” by Cat Stevens, “Down by the Bay” by Raffi, “The Promise” by Tracy Chapman – chosen either for the meaning behind the lyrics or for the sheer joy of the innocence of the song. 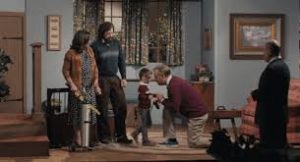 Not to give away too much but A Beautiful Day in the Neighborhood is not only about a man named Lloyd. It is about the reclamation of a soul and for anyone with leftover negative feelings from childhood with which they struggle – so, everyone. And the beauty of this Neighborhood is the solution which this lovely man demonstrated daily to the world.

So go see this gentle movie about the healing powers of a genuinely kind and loving man who performed miracles by simply taking Jesus’ instruction to treat everyone as their neighbor to heart and lived it every day of his life. 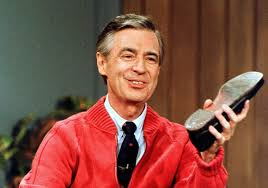 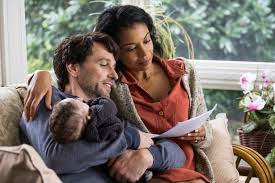 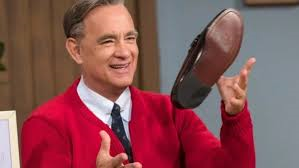