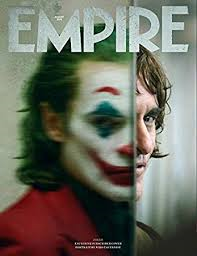 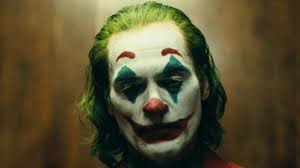 Joaquin Phoenix’ mesmerizing and brilliant performance as Joker is wasted in the nihilistic plot of this realism grounded, extremely disturbing, origin story.

ABSOLUTELY ADULTS ONLY. This is not Caeser Romero. Heck this isn’t even Heath Ledger. Extreme violence, profane language, discussions of child abuse and neglect, demonstrations of mental illness all make for a showing difficult for most adults to see much less children. 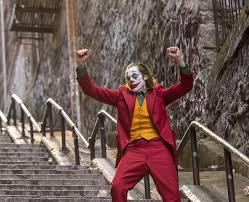 Under tour-de-force in the dictionary you should find a picture of Joaquin Phoenix in costume as Joker/Arthur Fleck from the movie of the same name. His performance in and as Joker should go down in cinematic history as a watershed accomplishment in the creation of an onscreen character.

The story in Joker is of a man’s descent into madness, and for Arthur Fleck, while the trip isn’t very long, it is shown in slow motion. 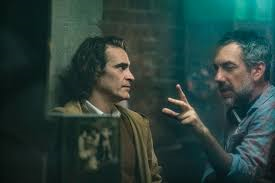 Todd Phillips, writer/director, takes a stab at what could be described as a documentary about the real story behind Joker, from which all of the cartoons and comic books were based, told in an observational style, as though Jane Goodall had hidden cameras on Arthur Fleck instead of gorillas.

Without giving too much away, 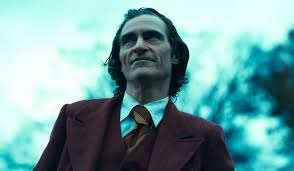 Arthur is not born but created, as he suffers mentally, emotionally and physically at the hands of a mental health system which fails him, the people who should have protected him, and a violent uncaring culture which takes advantage of his initial simple view of life.

One of the main characters in Joker is invisible – the soundtrack. 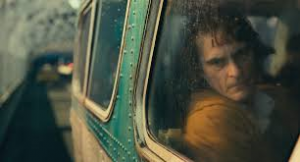 The music accompanying Joker is incredible, following Arthur like an unseen ghost, drawing in his madness and breathing it out again for others to hear. Hildur Guonadottir, an Icelandic composer, weaves a web of truly haunting cello music which, at turns, lulls and aggressively pursues the listener, echoing Arthur’s multi-faceted insanity: his depressed, hopeless state of mind, his hallucinatory flights of fancy, as well as his manic episodes of single-minded determination.

The cinematography visualized by Lawrence Sher is masterful.  From the grim hues and motifs of rain and shadow, to the camera work which uses techniques such as the “dolly zoom” aka the “Vertigo Effect” where the camera pulls back and zooms forward at the same time – all work together to allow a bleak and twisted perspective into Arthur’s broken mind.

But, most tragic, all this wealth of creativity and talent is ultimately wasted.

While Joker, as I mentioned, can arguably be considered the origin story from which all the other legends and mythology of the D.C. Joker emerge, especially the cartoons, the comics, and Jack Nicholson’s rendition, the viewing of the movie is a long travail of suffering with very little purpose. In films like Les Misérables, for example, the suffering of 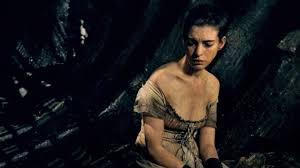 Fantine and Jean Val Jean is altruistic and ultimately redemptive, teaching humility and mercy to the characters and vicariously to the audience. In Man of La Mancha, the prostitute, 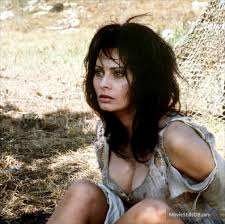 Aldonza, is shown literally and figuratively in the ditch in which she self describes as having been born, in order to illuminate how far Don Quixote’s kindness brings her when she reforms. Even silly fare like disaster movies serve as a mechanism for the characters to show courage and self-sacrifice.

In The Dark Knight, 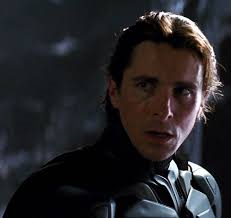 Bruce’s losses mold and inspire him into becoming a self-appointed defender of the weak and innocent. And there are Judeo-Christian motifs in the Dark Knight. Bruce Wayne dies to himself everyday, denying his own comfort and pleasures, instead taking on the sins of others, all the while pitted against the remorseless demonic figure of Heath Ledger’s Joker. 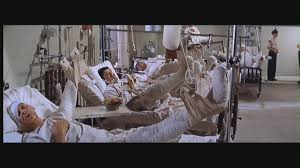 Even farces such as Mad Mad Mad Mad World, which feature the ne’erdowell indulgence of greedy impulses by groups of people succumbing to temptations, serve as lessons in horrible warnings against sinking into the mire of one’s baser instincts. The Mad Mad ensemble put themselves through brutal punishments and ultimately go to jail – all while making us LAUGH.

But there is nothing absolutive in Joker, nor are there any hints of a reckoning to come. 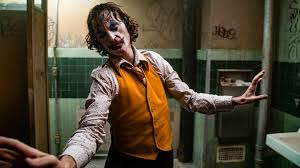 And there is no proportionate justice for the wicked, especially not for Arthur, no purpose to anyone’s suffering and no humor. Joker is unrelentingly grim, unendingly dark, and grindingly depressing. In the end, the audience is left only with the familiar figure of a boy standing over the dead bodies of his parents and the dancing of Arthur in his Joker costume amidst the rampaging rioters in a burning Gotham.

Joker does serve as a 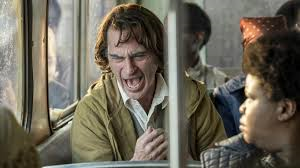 demonstration in favor of institutionalizing the mentally disturbed as opposed to releasing into the “wild” those incapable of functioning in society.

It also serves as a horrible warning against the efficacy of vigilante justice as Arthur quickly moves from killing in self defense, 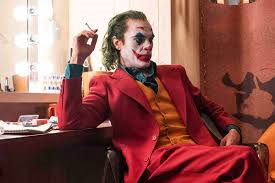 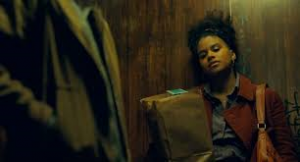 Douglas Hodge makes a singular impression as Alfred Pennyworth, one of the only characters in the movie whose focus is not on themselves, as his primary concern is to protect Bruce, and 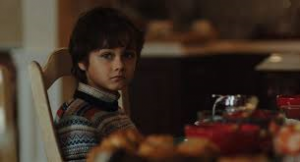 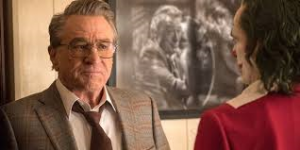 Robert De Niro has a small role, as talk show host Murray Franklin. DeNiro’s presence is delicious irony. De Niro has played both a character as equally as unhinged as Arthur in 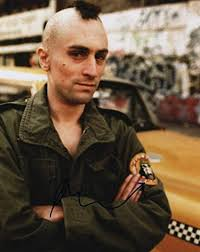 Taxi Driver and as demented a fan who faces off against an idealized talk show host in the lesser known King of Comedy. DeNiro’s resume is incredible, featuring a list of movies with enough quality and variety to have secured the careers of a dozen actors: the casual, criminal violence in the characters of 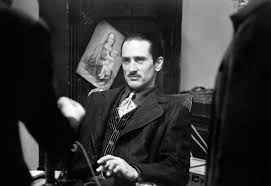 The Godfather II, The Irishman, and Cape Fear, the flawed heroes struggling in the dark worlds of Midnight Run, 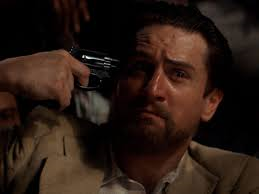 Deer Hunter and Taxi Driver, the boxer in Raging Bull, the captain of a fantasy ship in the light farce

Stardust, the aging lead in the romantic comedy 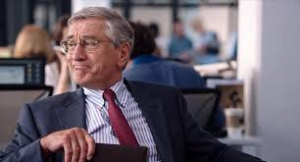 The Intern, the slaver turned priest in 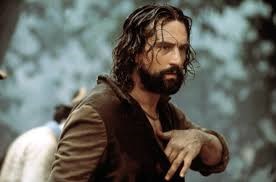 The Mission, the grim and frightening Al Capone in 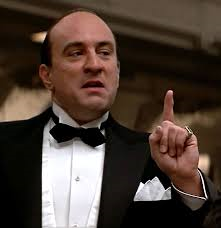 The Untouchables, the moving victim of catatonia in 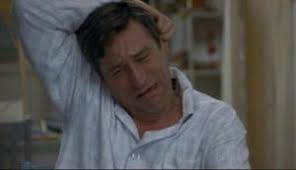 Awakenings. De Niro is impossible to pin down. Admittedly, it is a testament to the quality to which the filmmakers were aiming in Joker, that the legendary De Niro, himself a master at his craft, would agree to participate.

Unfortunately, the abundance of talent in Joker does not resolve the ultimate meaninglessness of the plot. The audience, much like Arthur, suffers pointlessly in following Arthur’s moral and mental descent. 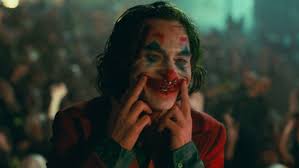 While Joaquin Phoenix’ performance is mesmerizing and probably should serve in every acting class as a “how to create a character on screen” and while the director and the music serve, with masterful art, to bring us into Arthur’s state of mind and point of view, the journey ultimately has no end, no goal, and no exit strategy from the depths into which Arthur is thrown or the hole he continues to dig at the bottom of his well.

As of the writing of this article Joker is the highest grossing R-rated movie ever made. 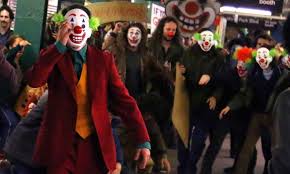 And it is disturbing to consider that such a pointlessly violent and unrepentantly dark film should attract so much attention. 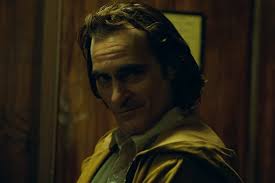 If you are a student of acting, Joker is worth enduring for Phoenix’ performance. But for those just seeking entertainment or an extension to the D.C. world of Batman and Joker, give this one a miss and re-watch 2008’s The Dark Knight. 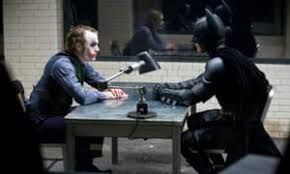