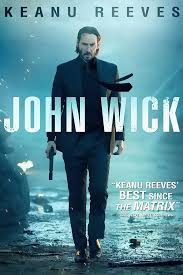 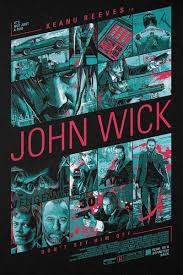 Ultra-violent movie which skates on a thin excuse for revenge to create large piles of dead bodies.

Adults only, and then only those with a stomach for violence: intense weapon and martial-art combat lethal force, and  extreme language. Its only “virtues” are a minimal amount of sexuality, mostly limited to bikini clad escorts, and the fact that the protagonist is a devoted and faithful, albeit grieving, husband.

I know I’m probably the last one on the train here with John Wick (2014) as it has been out so long there is now a third installment. Having just seen the first one and with the John Wick: Chapter 3 – Parabellum in theaters now, I felt compelled to make some comments about the “origin” story.

SPOILERS FOR JOHN WICK, TURNER AND HOOCH, A DOG’S PURPOSE, AND MARLEY AND ME 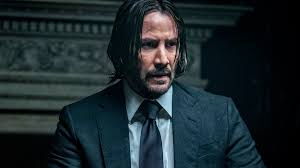 The premise, in case you have been on a prolonged abstinence from movies, is that a retired assassin goes on a massive killing spree after someone shoots his dog. 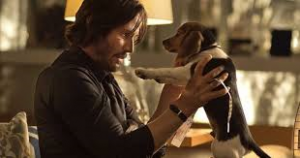 Don’t get me wrong , I am sympathetic to Wick’s righteous anger over the unnecessary killing of a puppy. As I have mentioned before in other posts, while I can tolerate an awful lot of violence in an action movie, I cringe at the thought of something happening to a dog. That point has actually prevented me from ever watching a couple of movies, including:

Turner and Hooch, and Marley and Me. I have even been putting off watching A Dog’s Purpose even though the dog gets reincarnated multiple times, because I know the viewing will require a couple boxes of kleenex.

My point being, from a cinematic point of view, I am quite sympatico with a lead whose motivation, which propels the entire running time, is the death of his dog.

However, even by my rather indulgent parameters of an average action movie, wherein the protagonist is given nothing to lose, I could not help but yell at the screen occasionally, wondering why his opponents did not handle the situation quite differently. 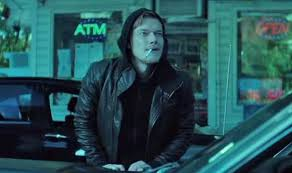 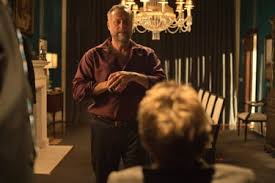 (Michael Nyqvist from Mission Impossible: Ghost Protocol and the Naomi Rapace version of the Dragon Tattoo girl). Iosef had come to steal John’s hot car – and the dog just got in the way.

As Viggo, the Slavic Vito Corleone points out, it was bad luck that brought them back together in this way. But a little common sense and a teensy bit of courtesy could have mitigated the situation, if not established an easy detente.

The dog was the last gift from John’s dying wife. From the reaction of wiser heads than the aforementioned Iosef, the dog dispatcher, everyone knew about this and what the legendary assassin, John’s, response was likely to be. 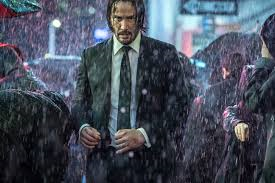 A hitman with nothing to lose and a lot of grief anger to expend, is a recipe for a bloodbath.

Therefore, I thought, had I been Viggo, (and keep in mind I am stepping into the shoes of a Mafia Don), I would have arrived with a new car, a new dog, a profuse apology, a chastised son with a black eye, and an offer to set up an entire charity Animal Hospital in the name of his deceased wife.

Instead, Viggo, knowing his son was stupidly in the wrong, as evidenced by the beating he gave Iosef after the fact, puts a contract out on the man to whom he refers as the best of the best, the one who was called Baba Yaga, not because he was The Boogeyman but because he was the one you sent out to kill The Boogeyman. This is a guaranteed plan for failure and Viggo’s downfall hereafter is from criminal (if you’ll excuse the pun) stupidity. I couldn’t help but think of Hawkeye in Thor. 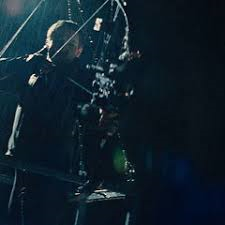 Hawkeye quips to Coulson: “Do you want me to take him down, or would you rather send in more guys for him to beat up?” 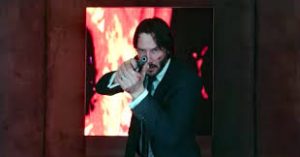 Because, that is what Viggo does – he sends in squad after squad to kill this unkillable killing machine. Viggo’s men are about as effective as Storm Troopers and were this a video game John would have the High Score. But WHY???!!! 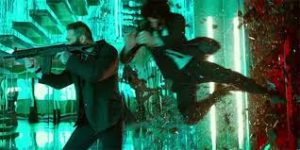 Viggo is an intelligent man or wouldn’t have been able to create and keep his empire. He MUST have seen the results of his decreasing returns. 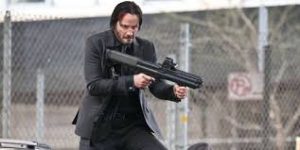 And no explanation is given as to why he would commit his entire army in a fruitless and hopeless effort to take out the one man he knows he can not defeat, especially when it seemed obvious to me there were alternatives. It’s not even that he is so committed to the protection of his son. Viggo doesn’t like or love his son and Viggo ultimately gives Iosef up to Wick as bait to save his own skin. 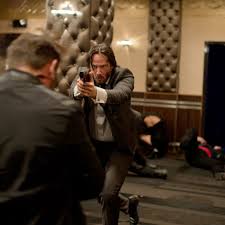 90% of the movie is John’s body count which quickly exceeds the opening scene in Saving Private Ryan.

I get the use of the MacGuffin. I even get stories where you put the protagonist in a corner with nothing to lose and watch them fight their way out. Movie franchises like Taken, Die Hard, Jack Reacher and even a few of the James Bonds are good examples of a protagonist who resolved knotty conundrums with fists and firefights. 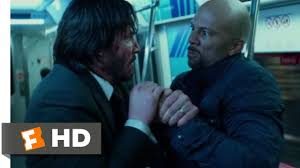 And I am the first to admit they are guilty pleasures. But the motivations are usually more compelling, as in: protection of a vulnerable family member, a national danger, or the righting of a grave injustice. AND the protagonist usually is witty, relieving the unremitting gore and violence a bit with dry one liners.

But, despite the fact I have often maintained that Keanu Reeves has missed his calling as a comedian, 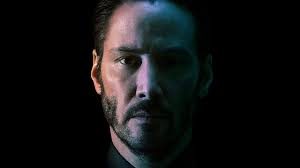 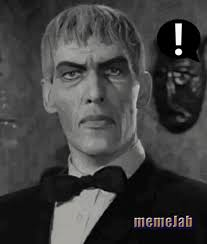 mini-Lurch from The Addams Family. Don’t get me wrong, I like Keanu Reeves. I just wish someone would DO something with him which entails more EXPRESSION!!!

When I refer to Keanu Reeves’ comedies, I’m not talking about the unintentionally – so bad they are funny – like Constantine, and his insult to the classic Day the Earth Stood Still. Nor am I referring to his well done stint as the singular dry villain in Branagh’s Shakespearean comedy 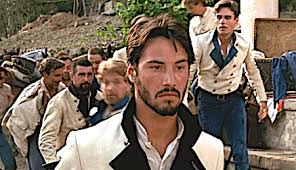 Much Ado About Nothing.  I’m talking about Reeves roles in legitimate comedies. If unfamiliar with Keanu Reeves’ comedies, I recommend the slapstick ridiculous 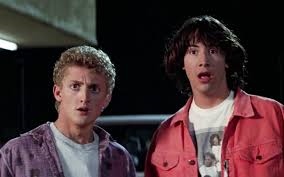 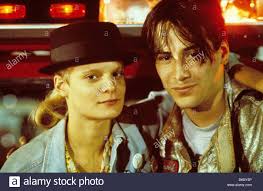 Parenthood. Both are for an older crowd though.

Reeves can be really amusing and cute with good timing. And while I’m not suggesting that a former assassin who has just lost his wife to cancer and his dog to a home invasion should be light-hearted, John Wick is unrelentingly grim where it perhaps did not have to be. I mean, Wick is SUPPOSED to be human, right?

I have often maintained that the best loved action films often have a sense of their own humor. Good examples are 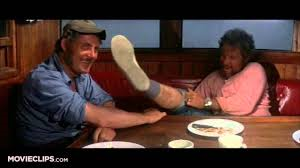 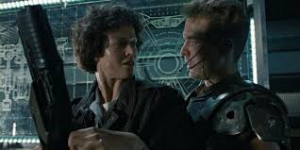 Die Hard movies. Tongue is planted occasionally but firmly in cheek and there is an awareness in the script of its own cliched vulnerability. 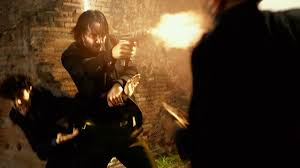 But Wick‘s level of constant violence with no emotional offsetting balance is just exhausting. 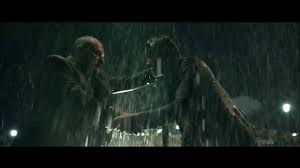 The cinematic atmosphere is dark and poetically sympathetic, as most of the movie takes place in dark interiors, at night, or in conjunction with bad weather.

There is an interesting juxtaposition with another film I have previously reviewed, 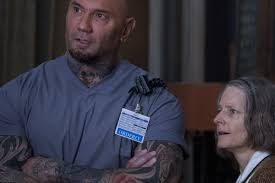 which DOES have a sense of humor, called  Hotel Artemis. Much of the third act of John Wick takes place in the Continental, a hotel renowned as a high-class refuge for people in John Wick’s line of work. Like the Artemis, a hospital for the underworld with questionable aesthetics, the Continental has a primary rule: you are not supposed to kill any of the other guests. A certain neutrality is supposed to be enforced there amongst society’s lethal predators. These two – the titular Hotel Artemis and the Continental in John Wick – exist in a consistent universe where you could put them on a double bill or even together in the same movie. But Hotel Artemis, unlike John Wick, has a heart and knows when to recognize the grin in even the darkest human comedy, and is a far better movie for that.

Small parts and cameos from the action-adventure pool abound in Wick from both TV and film. 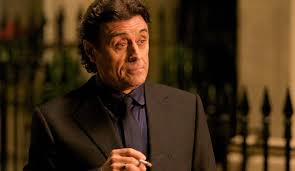 Ian McShane, who has added his talents to everything from westerns to British and American cop shows to Pirates of the Caribbean, plays the owner of the Continental. 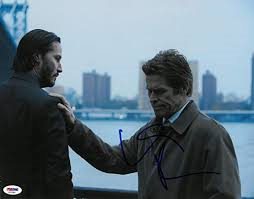 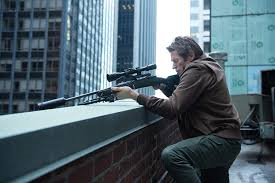 Adrianne Palicki, most notably the indominable Agent Bobby Hunter in Agents of Shield and Kelly Grayson in The Orville, is Perkins, a female assassin. 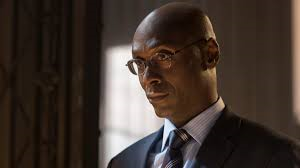 Lance Reddick from Fringe and Blacklist is Charon, the concierge of the Continental.

John Leguizamo, from Executive Decision and Baz Lurhmann’s ultra-violent version of Romeo and Juliet, is Aurelio, the chop shop owner to whom Iosef brings Wick’s stolen car and who is the first to clue Iosef in to his mistake with a punch in the mouth. There were so many cameos from the action adventure genre that I would not have been surprised to see Samuel L Jackson show up. Sadly, that was not to be. 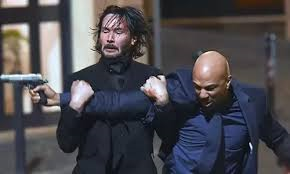 The acting is good and the shoot-‘em-up-bang-bang with combined martial arts is well-choreographed and interesting as Wick dispatches his targets with precision and no innocent bystanders to the count. 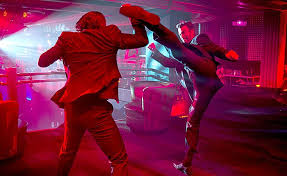 Wick is obviously an anti-hero with a ledger redder than Black Widow’s. As action adventures go it was brainless fun and emotionally cathartic to watch a bunch of bad guys being blown away with incredible efficiency and expertise by another, but sympathetic, bad guy. It is always a pleasure of sorts to see anyone do their job with such skill and excellence whether they are a pastry chef, a ghost hunter, or a paid assassin. But still I couldn’t help perseverate on the plot point of the missing opportunity to mitigate. Had Viggo tried to placate Wick but been rebuffed I would have found the scenario far more believable at least within the universe of that genre.

But what I truly do not understand is how the film makers can justify one sequel much less two. I mean, in this first one John killed …….. EVERYBODY. And I wonder about the movie’s core world-view. 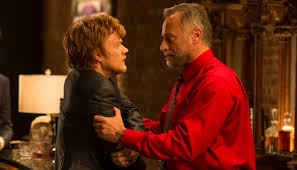 Iosef, for all his being a completely cruel jerk, was not responsible for the death of John’s wife nor did he attempt to kill John. Therefore, John’s reaction to the theft of his car and slaughter of his puppy without at least an attempt at peaceful and equivocal recompense, to me seemed over the top even for this kind of movie, making it hard for me to empathize with a protagonist who creates this much mayhem.

Compared to similarly set up movies like the aforementioned Die Hard, Taken, or from a HUGE variety of styles where the protagonist goes on a mission to avenge a terrible wrong with extreme prejudice, like: True Grit, Death Wish, The Count of Monte Cristo, or Dirty Harry – even for me, even for this genre of movie – John’s reaction was too extreme and with insufficient reasonable motivation, making this a (if you’ll excuse the pun) fatally flawed story.