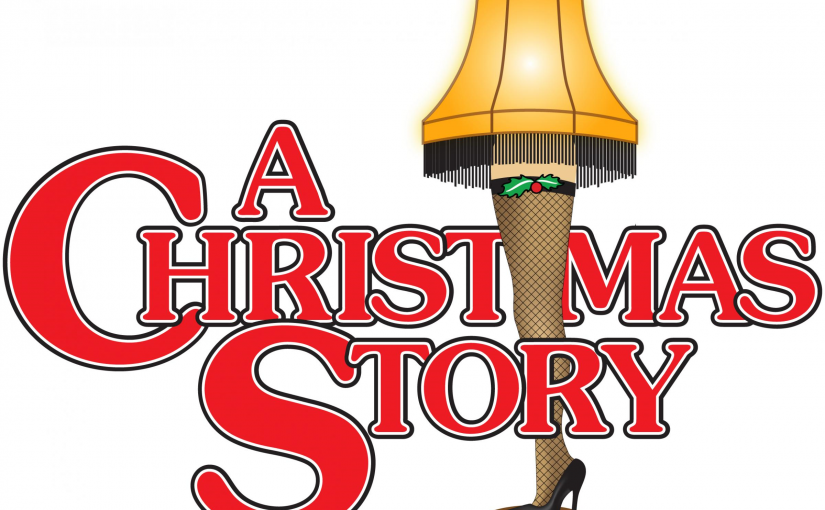 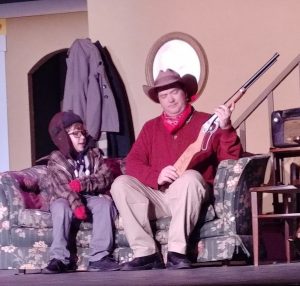 Lovely Christmas tale, set in 1950’s Americana, of a narrator’s look back on his childhood quest for the ideal present during the weeks leading up to Christmas morning. 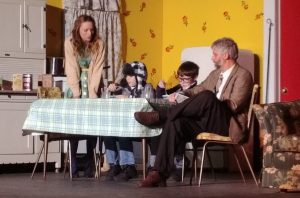 Anyone and everyone – children of all ages. 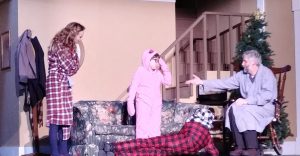 A Christmas Story, which opened December 6, 2019  at ACTS Theatre and plays through December 15, 2019 (GET TICKETS HERE), is the stage play version, which premiered in 2000, based upon the charming classic holiday movie from 1983, which was, in turn, based upon the semi-autobiographical anecdotal book by Jean Shepherd, titled In God We Trust: All Others Pay Cash.

The play tale is the same as the movie, narrated by the adult version of Ralphie, a little boy growing up in Indiana in the 1950’s during the weeks leading up to Christmas the year he desperately wanted and 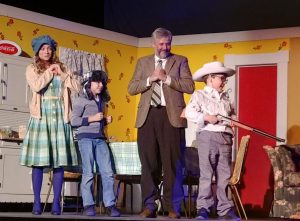 fantasized about having “an official Red Ryder, carbine action, two-hundred shot range model air rifle with a compass in the stock, and this thing which tells time”. Unfortunately his mother, his teacher and even the department store Santa gave the same litany response: “You’ll shoot your eye out!”

While Ralphie’s ploys to obtain this forbidden item create the Christmas tree trunk of the story, the real gems, like ornaments on the branches, are the moments of true Americana which made up Ralphie’s childhood: the bundling up ritual before venturing into the bitter weather to get to school; Ralphie’s fantasies of protecting his family and friends with his BB gun; his father’s constant struggle with their old furnace accompanied by a string of invectives translated for the play into child-appropriate made up words; 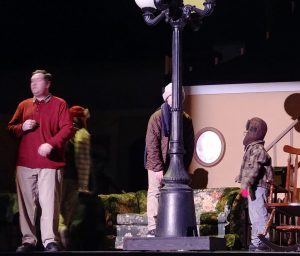 Ralphie’s friend Flick getting his tongue stuck on a lamppost subsequent to a triple dog dare; his fellow classmate Esther Jane’s obvious crush on him about which he is, at the time, completely oblivious; the eccentricities of his little brother Randy; and most importantly the close knit time he spent with his family. 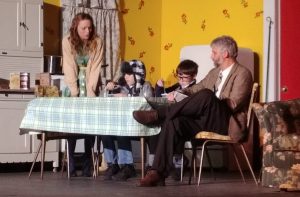 It didn’t matter that the dinners often suffered from routine or his father erroneously thought he was a mechanic. The magic was in the fact the parents and boys were together every night and the quantity of time they spent together AS a family which brings meaning to the real Christmas Story. The moments in a child’s life spent, as my own husband refers to them, MAKING memories. 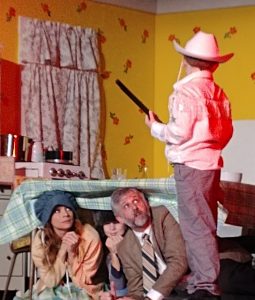 A Christmas Story is a comedy, in as much as people are naturally funny. It’s not a series of one liners or gags but finds humor in the people we have in our lives, or even the people we are, all of whom find places in this story.  From Mother, “the Old Man” and brother Ralphie, to the bully Farkus and Miss Shields, his fifth grade teacher, all the characters will be quite familiar even to those who have never before seen the movie or this play. These are people who exist in all our lives in one form or another. 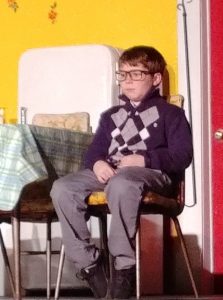 Noah Herbert is perfect as Ralphie, the young lead, sweet and ingenuous, he is the embodiment of that innocent time. 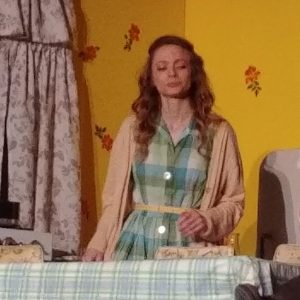 Elizabeth Harper, as Mother, is the practical center of the family, kindly guiding her family through their antics like a loving human “face palm” of affectionate exasperation. 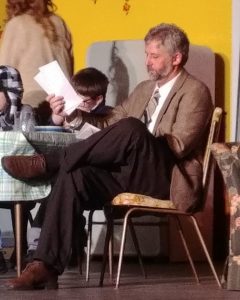 Bobbie Guillory is “The Old Man”, a hard working devoted husband and father, whose amateur mechanics, whimsical commitment to contest entering, and attachment to a uniquely peculiar prize lamp inform many of the family events. 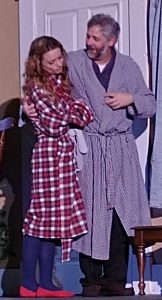 Zac Hammon is the adult version of Ralphie looking back on his family and that particular Christmas with a fond nostalgia and warm wisdom, providing narration for the necessary exposition. 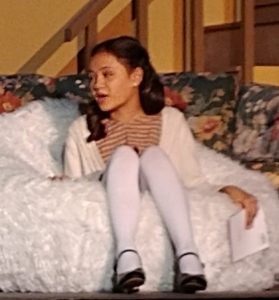 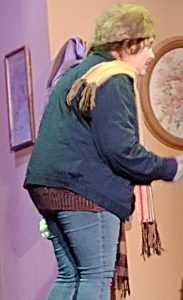 Hannah Miller chews the scenery as Scut Farkus, a comical version of the class bully. 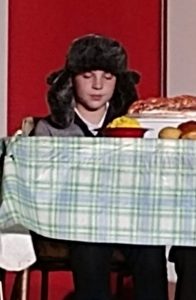 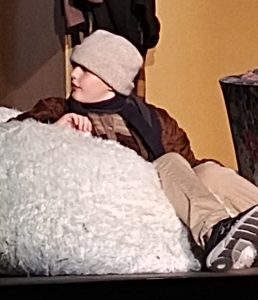 Elliott Mitchell is the hapless Flick, constantly the butt of bad luck.

Dorothy Thomason is fun as the stern but well meaning Miss Shields. And rounding out the cast is

Dylan Freeman as Schwartz, and

All the young actors do a magnificent job in their portrayals, timing and enthusiastic characterizations of these 1950’s children.

The set is appropriately always against the backdrop of the family kitchen. The kitchen was the heart and center of Ralphie’s home and life, with occasional forays to a nicely constructed upstairs bedroom to where Ralphie retires to think out loud, write essays of devotion about his Red Ryder gun and contemplate the mysteries of his life. 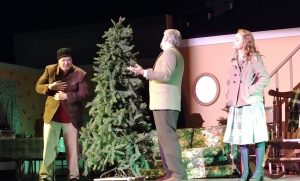 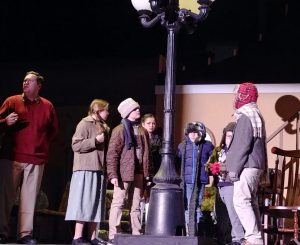 This works on a conceptual as well as practical level, as the consequences of the outside world 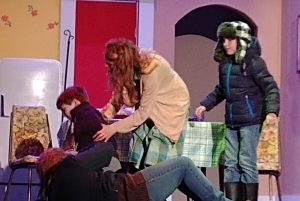 will eventually return and resolve to a satisfying conclusion there at the kitchen table anyway within the bosom of his family.

Director Clay Hebert, along with assistant Stan Morris and stage manager Lauren Manuel do a terrific job bringing this story together. 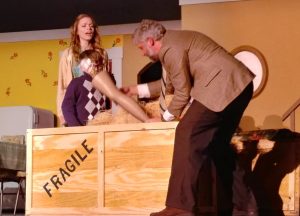 Much of this stage incarnation echoes true to the film version but I must especially commend the director and his crew in what I personally perceive as a major improvement on the dynamics of the parents. In the 1983 movie Mother, as portrayed by Melinda Dillon, is a mousy creature and Darren MacGavin’s “Old Man” is kind of a clueless bulldozer. But Clay Hebert’s vision transforms those unappealing characters into the 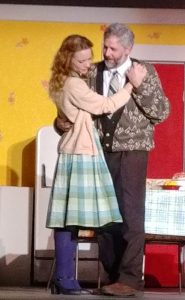 charming complementary couple of smart pragmatic Mother and energetic idealist “Old Man,” who we parents would not mind being remembered as. 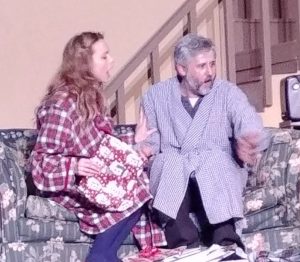 Plaudits go to all the cast and crew for successfully coming together as a troupe to offer this magical Christmas gift down memory lane to Lake Charles. 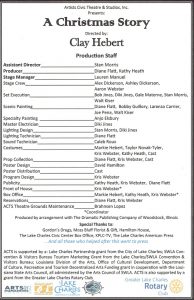 So go see this warm hearted show, which will conjure nostalgia for the past in the adults, ring true for children in the present, and light a

unique lamp in the window for all families who look hopefully towards this Christmas and all the future Christmases to come.