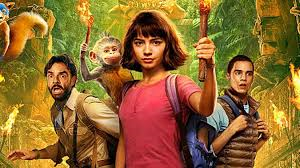 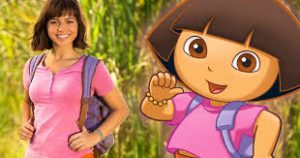 Disjointed mess of a movie based upon a cartoon with no real effort to make a live action worthwhile. Choppily written and poorly acted, what is not cliché looks like a weekend effort to produce an advertisement for the Dora the Explorer cartoon series.

There’s nothing inappropriate for children but nothing of merit to keep their attention either.

In the movie Daddy Day Care, while meeting one of their newest six-year old charges, they discover the kid can speak Klingon. 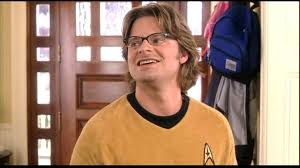 Steve Zahn’s character, Marvin, who plays the resident geek of everything television, translates then asks, shocked, “How much television does this kid WATCH?!” I wondered the same thing about the filmmakers of Dora. It felt written by someone whose childhood was spent absorbing WAAAAAY too many television visual and sound bites OR who had zero confidence in their audiences’ ability to maintain any attention span whatsoever. That, with the rushed weekend-shoot quality, bad acting from even the likes of Michael Pena and Eugenio Derbez, and the TV movie unrealism of wearing clean white pants after 2 days sleeping rough, made it impossible to relate to this movie.

The structure, such as it was, never settled down. I had whiplash 20 minutes in as Dora kept changing the direction of the story.

This movie is all over the place. Dora can’t decide if it wants to be The Lego Movie, Who Framed Roger Rabbit, a kid version of Indiana Jones, a live action cartoon, or a spoof of her origin animation.

It opens as though you’re watching an episode of a live action Dora The Explorer, with a six year old Dora dancing and skipping in pristine clothes through a jungle full of arguably dangerous animals, like a poisonous frog. Then we cut to discover it was all in her imagination as she sits in a plywood race car with her cousin, Diego. Then during dinner she repeatedly looks off in the distance to empty air asking “Can YOU say _________” filling the blank in with a previous spoken word or scientific reference. Even her Dad thinks this is weird and her mom assures him she will outgrow it. 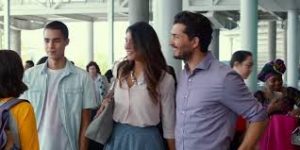 Diego leaves with his parents to America and we cut 10 years later to Dora, now played by Isabela Moner, (wonderful in Instant Family), whose talents are excruciatingly wasted in this movie, singing her way through the jungle with a talking monkey – which turns out NOT to be part of her imagination, even though the rendering of the chimp is decidedly unrealistic. 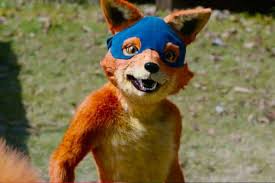 And then, despite everything else being more or less based on real life, there is the walking, talking fox with a thief mask who interacts with humans as though he wandered in from a sequel to the awful Incredible Mr. Fox. Even the chimp is not openly this anthropomorphized, except in one sequence alone with Dora, which COULD have been a moment of Dora’s overactive imagination. So the presence of Swiper among the troop of entirely human bad guys is just — odd — as though SOMEone had inhaled a bit too much of the hallucinogenic pollen which makes all the characters – for about 5 minutes of the movie – think they ARE cartoons.

For a while I kept expecting this to all be a continued figment of her imagination, ala Lego Movie. But it was just weird bad writing. 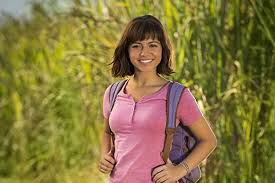 Dora is portrayed as an aggressively cheerful Pollyanna who seems oblivious to most social customs, all attributed to the fact she was homeschooled by her professor parents as they explored the jungle.

Then we switch to a “fish out of water” story as Dora is sent to live with her aunt, uncle and now grown and civilization-acclimated cousin, Diego (Jeff Walhberg) so her 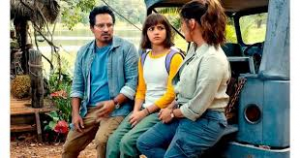 clueless parents (the usually scene stealing Michael Pena – adorable in Antman and heartbreaking in Collateral Beauty) and Eva Longoria can go look for the City of Gold. Pena tries over hard to quirk up the movie but 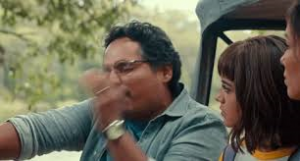 an interminable minute of his beat box “Rave” music imitation is more painful than amusing. 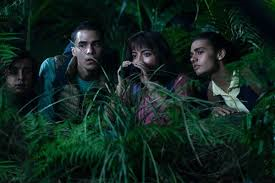 Walhberg, nephew of Mark Walhberg, spends most of the movie looking embarrassed. It was hard to tell whether his pained expression came from his character’s embarrassment over his awkward cousin’s behavior, or the actor’s own personal humiliation for signing on to this poor outing. Dora is sent to a traditional institutional school where, despite her obvious education and intelligence she can not grasp the art of “fitting in”. 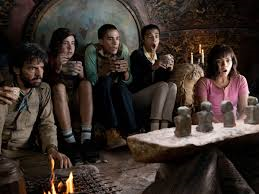 THEN, cobbling together an excuse for a Jumanji-style misfit group – the jealous class pet, Sammy (Madeleine Madden), the geeky infatuated boy, Randy (Nicholas Coombe), Dora’s cousin, Diego, and Dora – are all kidnapped and brought to the jungle as hostages to convince Dora’s parents to help the bad guy treasure hunter, ala Indiana Jones, find a lost city of gold. Dora’s parents are purist explorers who would never seek to prosper from their educational finds, yet never explain how they can afford to spend all their time in comparative luxury out in the wilds.

On top of everything else Dora sings her way through different moments – not like a musical but with the kind of singsong childish skipping pieces one might hear in a —- 10 minute cartoon. 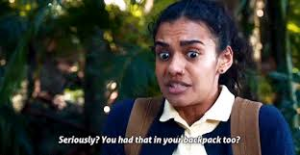 She even makes up a “poo song” for a city friend who must abide by a call of nature outside for the first time in her life. 90 minutes of this had me rooting for the bad guys.

The last scene indulges in a Disneyfied-Bollywood dance sequence. The energetic choreography in Indian-sourced movies are usually my favorite parts. The dances in the true Bollywoods are meant to enhance the demonstration of emotional bonding which has progressed throughout the movie. In Dora, it’s more like sending disappointed kids off from a poorly planned and rained out celebration with soggy party bags, it just doesn’t help make anyone feel better about the event.

And it’s a shame because such a good movie could have been made out of the idea of a rugged homeschooled kid providing guidance literally and socially to a bunch of institutionalized kids to help them think outside of the box and become better people. Sadly, this is NOT that movie.

I suppose it could have been worse given the lead writers were Cliff Gifford who, as creator of the Dora cartoon,  has, previously, not really written for people and Matthew Robinson whose major screen credits up to now have involved movies titled Sex Surrogates and Jerked.

In short, don’t waste your time on this nearly two hours of drivel.