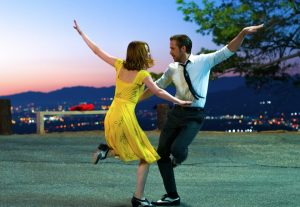 INEVITABLE SPOILERS
As Oscar time rolls forward it is to be noted that La La Land has garnered a record tying 14 nominations – an accomplishment only achieved by two other movies to date: Titanic and All About Eve. 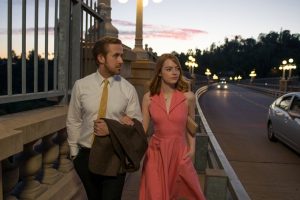 La La Land is the best movie I’ve ever seen that I do not like. Please bear with me. There is nothing wrong with this movie. It is, in fact, an EXCELLENT movie. It is fascinating, well acted, beautifully filmed and I would see it again. But it’s just not my cup of tea.
Let me explain: La La Land is the ups and downs of a love story harkening back to the old song and dance musicals of Singing in the Rain where our protagonists and total strangers break into synchronized dances and “improvise” brilliant and witty songs on the spot. 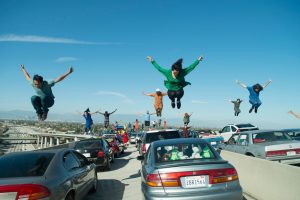 Mia and Sebastian “meet” in a traffic jam subsequent to an amazing and almost bizarre dance routine spontaneously begun like a flash mob on a gridlocked Los Angeles freeway. We then observe them in their respective lives: Mia, an aspiring but failing actress who keeps her rent coming in as a waitress, and Sebastian a jazz player/composer who chaffs against the confines of the banal music he must play at the bar where he gets a steady pay check and tips. 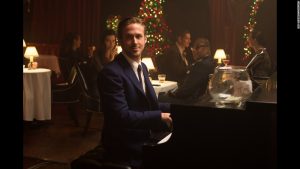 Things just do not happen the way we expect. For example, other than Mia and Sebastian we never see the people in the dance troupe traffic jam again. When we see Mia in her apartment it is HUGE and you are left wondering how on Earth does this girl afford this place on a waitress’ salary only to suddenly find she has THREE roommates.  Mia wants to be noticed and is left breathless by the appearance of a “fictitious” celebrity yet shuns the shallow Hollywood parties she finds she must attend to GET noticed. 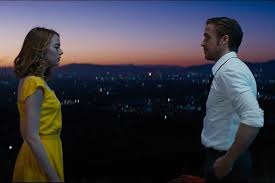 Much of the story of the two lovers follows an expected thread – boy meets girl, they do not like each other, boy and girl find they constantly run into each other or are thrown together by circumstance, deny their attraction for each other but leave the audience winking as at Benedict and Beatrice in Much Ado About Nothing knowing they will fall hopelessly in love. There are misunderstandings and blocked opportunities, Gift of the Magi-type sacrifices, and long lovely embraces. 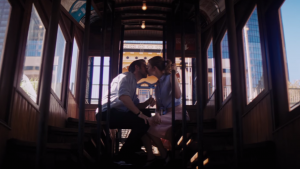 But the story never quite goes where you expect it WHEN you expect it. Without revealing more than I have to about the plot or the ending, let’s just say there was more discord in the harmonies than is appealing to me. See I am a dyed-in-the-wool romantic. I write screenplays (completely unpublished and with large files holding many rejections) and I have a saying that I cannot write an unhappy ending. It’s just against my nature. There’s too much UNhappiness in the world so when I am waxing creatively I do not want to go down that road. That does not mean stories with unhappy endings are bad – Romeo and Juliet, Othello, Saving Private Ryan, much of Les Mis, Gone With the Wind – all are beautiful brilliant movies with much to cry about, but not what I like to WRITE about and not in my “go to” pile when I want to just relax with a friendly piece of entertainment.
Same goes for the music I enjoy. I like soft rock and Christian rock and even some of what used to be called Bubble Gum (Herman’s Hermits, Captain and Tennille).  Now my husband LOVES the more discordant – both in movies and music. He thinks an unhappy ending is more realistic and therefore more satisfying and jazz is the sound that floats his boat. 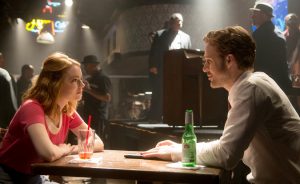 Which brings us to the theme of the movie. Mia at one point at the beginning of their budding romance admits she does not like jazz. So, our smitten Sebastian takes her to a jazz club and explains his fascination. “It’s conflict and it’s compromise, and it’s very, very exciting! It’s new every time.”
Another place in the story, Sebastian uses the same metaphor to encourage a despondent Mia. Sebastian says: “This is the dream! It’s conflict and it’s compromise, and it’s very, very exciting.”
Which is an excellent point and another way to describe what I suppose is the attraction to jazz for aficionados.
The movie IS very much like jazz – a sweet musical line that runs through the film twisting and turning but staying true to its fundamental theme. But at the same time surrounded by, encased in and sometimes driven by the harsher realities around it. It’s tough to keep up an idyllic love story when you have to exchange your rose colored glasses for a hands on opportunity to pay your bills. And even harder when one of the duet just does not seem to be fully committed to the tune. 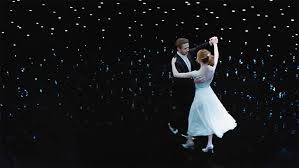 There’s a scene near the end which gives the audience the full blown unexpurgated full on dream of what you expect and want from a movie like this, but then in a slap in the face and what feels like condescension we find it is just a dream. As though the screenwriter was yelling at us – “This may be what you WANT, but this NEVER HAPPENS, so GET OVER IT!” 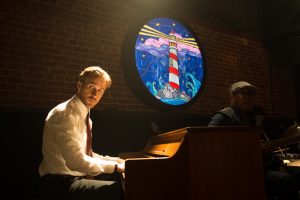 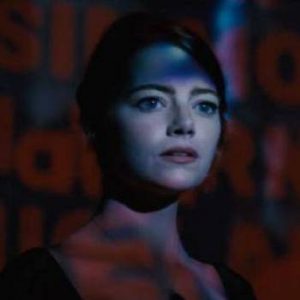 So as the credits rolled I was left dissatisfied, somewhat disappointed, unhappy, and maybe even a wee bit insulted while still admiring the panache, the vibrancy, the beauty of the film I had just seen. (I do not think I was alone because as the credits began rolling someone immediately behind me summed up my feelings in a conversationally loud: “What the H***?!”)
BUT — from a jazz point of view it stayed true to Sebastian’s devotion to the genre: The movie hinted at and teased about with a familiar theme but when all was said and done it ended suddenly and on a discordant note. “It’s conflict and compromise” – but alas, if you are expecting a happy ending — it is only a dream. 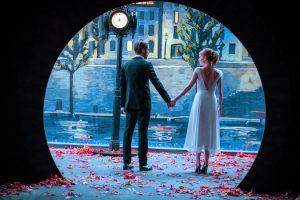