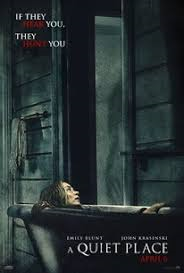 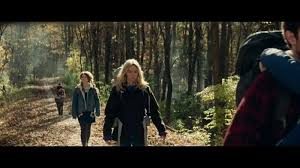 Brilliant and terrifying sci fi analogy to the terrors every parent faces in trying to protect their children from this dangerous world.

WHO SHOULD GO SEE IT:

Older teens and up ONLY, and then only ones who can manage Alien without having to use a nightlight for a month.

Parent World – where everything can go wrong, go wrong, go wrong… (apologies to Michael Crichton), where a simple accident, a misjudgement or even a well-intentioned but ill advised act of kindness can rain unintended and unanticipated disaster upon your family.

Some movies are quite difficult to watch but they should be seen anyway. Some because they are history and we should be witness to the events even if it can only be done from a vicarious distance, such as Saving Private Ryan or Schindler's List. Some for the sheer artistry of the writer/director like Alfred Hitchcock's Psycho. Others, and many of these are based on classic literature, because they teach us lessons – Dracula, Frankenstein, Dr. Jekyll and Mr. Hyde. And some for the sheer roller coaster thrill of having the pants scared off of us – like Alien.

In a small way John Krasinski's A Quiet Place fits into all of those categories. 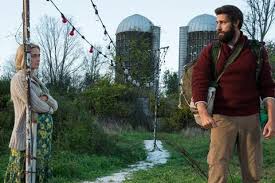 A Quiet Place is set. almost theatrically, within the confines of a small farm in an unnamed area, populated by a family of unnamed characters only identified in context by their relations to each other: Mom, Dad, Sister, Older brother, Younger brother. This is deliberate, I understand, in order that the message will apply to any family and every family.

The members of this close knit family are survivors of a world wide cataclysm wrought by an invasion of creatures heretofore unknown on this planet. Where they came from – lab experiment gone awry like in Stranger Things, alien invasion, some critter from beneath the earth – is never explained. That too is on purpose, I think. These creatures are lightning fast, have skin of armour, razorsharp stilleto claws and multilayered teeth which would make your average Alien envious.

As abandoned blowing newspapers declare they are impervious to bullets or bombs. But they are blind. They have astonishingly acute hearing and will only hunt you if they hear you. 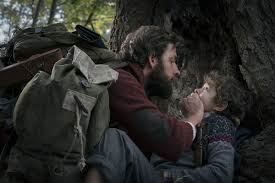 And the smallest noise – a cracked twig, a dropped glass, a clink of a belt buckle WILL be lethal, especially if you are out in the woods.

So the family moves in total silence – walking on sand paths laid meticulously out, food served on lettuce and eaten with the hands, games of Moonpoly played lying on a floor with puff balls. No animals, little metal, no running machinery. 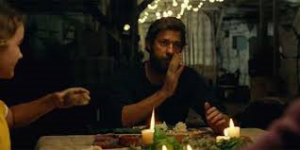 The family communicates with sign language and code lighting strung around the farm. 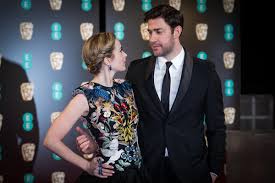 John Krasinki and Emily Blunt, married to each other and parents to two daughters, usually known for their comedies – respectively entries like 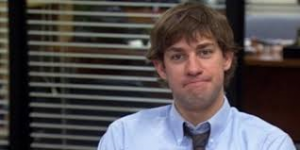 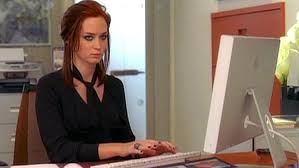 The Devil Wears Prada – have created a masterpiece of horror fiction which ranks up there with the classics. Bridging the gap between their comedy days and this have been some significant serious movies, almost as though in preparation for their roles in A Quiet Place, which have allowed them to portray bad-ass characters, such as, respectively 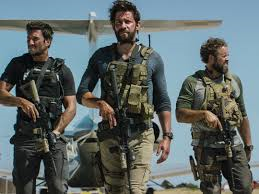 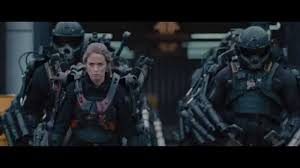 Live, Die, Repeat.  A Quiet Place tells not just a frightening story to scare the kiddies, it tells a story intended to reflect the terror that every parent feels about trying to protect their children from the vastness of horrors, evil, and dangers of this fallen world in which we live.

I know this is deliberate because Krasinski has stated as such in interviews – it is a "love letter" to his and Blunt's two (and future) children – to show what lengths good and heroic parents must go to to protect their children.

Other authors have attempted similar stories. Stephen King, for example, wrote Pet Semetery (sic) as a cathartic exercise to help him deal with the possibility of losing a child. But in that story, the parents act selfishly in order to assuage their own guilt and grief, wrecking supernatural havoc in the process. They do not ever seem to think about what would be best for their children, or even each other. But in A Quiet Place, everything these parents do, everything they must suffer together, every choice they make, every precauition they take, every bit of research they do, every exercise they perform is geared to seeking ways to help their children survive in this cruel and lethal world – just as every good parent does even when not faced with superhuman horrors.

Mom and Dad homeschool their children. There is one almost whimsical scene in which Blunt's character as Mom is teaching her oldest son to divide. All communication is done through sign language. Dad wants the boy, rightly frightened to go outside the confines of his familiar home, to go out fishing with him so he can learn to feed himself and his siblings, as the Mom explains when she is aged and pitiful, miming being old and toothless.

The underlying bittersweet message is that, as things stand, it is unlikely any of them will live to die of old age. It's a gentle scene but the point is made. Mom and Dad tell their Older Son in as light a way as possible: If and when we must die for you the legacy we leave is to have taught you how to provide and protect yourselves as best we can. 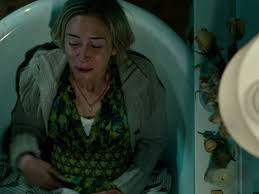 In an act of incredible bravery the Mom gets pregnant and they decide, as a matter of course without question, to bear the child. All provisions and plans are made to perform this extremely dangerous activity – child birth and caring for a newborn – in silence. If you have ever given birth, just imagine trying to do it without making a sound and you will have an appreciation of to what heroic lengths these parents will go to bring forth and protect their children's lives. 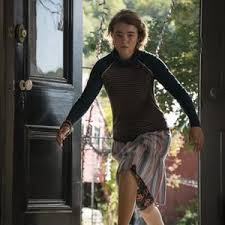 The acting is terrific. Almost ALL of the conveyance of emotion and communication are done with body language and expression. 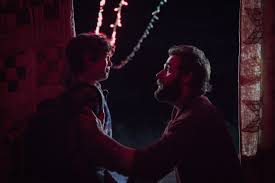 While they do have sign language subtitles you really don't need them to get the drift of what they are saying. The fourteen year old daughter (Millicent Simmonds) really is deaf and her performance is stunning. Noah Jupe plays the older brother and Cade Woodward plays the youngest child. All the kids have a natural affinity and chemistry with Blunt and Krasinski – so much so that I had to check to see if any of them really are their kids – they aren't.

This is a brilliant parable embodying in the form of a sci fi the dangers parents MUST try to protect their children from. I could imagine this being the fevered nightmare of a worried new parent – where, no matter how careful you are or what preparations you make, the slightest mistep can bring down calamity and catastrophy. 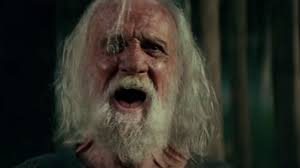 A neighbor who makes an unwise decision, poisons in the medicine cabinet of a friend's house, predatory humans who masquerade as care givers, car accidents, wild animals, burst appendix, 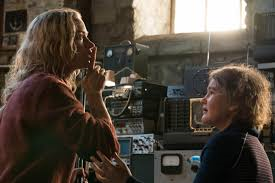 an unforeseen accident, a fall down a stairs. Then there is the concern of, even if you do everything right and protect them from all of the external terrors, what can you do to teach them the right things, educate them, guide them to being able to care for themselves spiritually and physically after you are gone. And blessedly there is at least SOME acknowledgment of God. The family joins hands in a palpably sincere and faith filled plea of thanksgiving and bequest for safety – without a word being spoken or even mouthed.

The aliens represent everything and anything that can endanger your child and how quickly and unexpectedly tragedy can swoop down undeservedly upon them, until the only thing you can do is stand between them and catastrophe to the best of your ability, no matter how hopeless it sometimes seems. And that the only guarantee you can give them is your unconditional love.

This is a brilliantly artful movie Krasinski has written and directed  – gorgeous outdoor scenes which still remind you of the sword of Damocles over their heads by the silence with which they move in it, 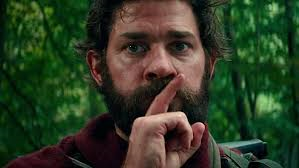 minimalizing the communication down to only that which is most essential and it works incredibly well to draw you into their family. Krasinski's thoughtful effectiveness in his use of sound and silence is occasionally breathtaking – taking advantage of the deaf daughter's vantage point where she hears nothing,

playing counterpoint to the sounds and potential sound around her as she tries to navigate in a tremendously sound lethal world. As though she is blind in a darkened room but does not see the flashes of lights around her which can make her a target for the predators nearby.

Despite some plot holes in the premise, within the Universe Kransinski has created the story is airtight and skillfully crafted to maximum effect.

The slightest sound is incredibly significant, a heartbeat has the impact of a drumroll in Beethoven's Ninth Symphony, and a single human scream has vastly more effect than even a Godzilla's roar in a "normal" movie. These noises, so casually easy to ignore, take on monumental importance, just as the intimacy of parent to child is magnified here in the visible incarnation of the intense constant danger which surrounds us in the real world. Careless driving drunks, rabid wild animals, cancer, lightning strikes on a sunny day, all coalesce into the nightmare vision of this one hideous monster, who can whisk your child away from you, before you can adequately react to protect them, and even as you look on in horror. It is as suspenseful as Hitchcock, as roller coaster of scares as you might ever want in a movie, and has all the earmarks of a classic – an endorsement of understanding to parents who are already watchful and alert, a slap of cold water reality of the terrible consequences which are possible to parents who may not be so attentive.

If this review alone has put you on edge and if the movie makes you just that much more concerned and wary for your children's safety, and a single child is rescued by a parent prodded even subliminally into a more wary watchfulness, then I think Krasinski has done the job he set out to do and is owed a grateful thank you. A small price to pay for the demonstration of watchful anxiety for his children to us, which mayhap makes us more watchful over our own. Thanks John.