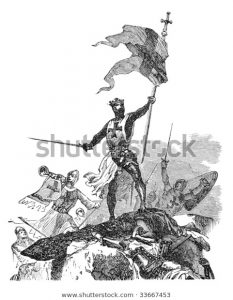 …AND NOW FOR SOMETHING COMPLETELY DIFFERENT (APOLOGIES TO MONTY PYTHON).

I’VE WRITTEN A: BATTLE TO THE DEATH, ROMANCE, COMEDY, COURT INTRIGUE, HISTORIC DRAMA, MURDER MYSTERY, AND BIOGRAPHY…AN ORIGINAL STAGEPLAY ABOUT THE LIFE OF WILLIAM THE MARSHAL, THE MAN WITHOUT WHOM ENGLAND, EUROPE AS WE KNOW IT AND LIKELY AMERICA WOULD NOT EXIST…BUT WHOSE NAME IS VERY LITTLE KNOWN FOR ALL THAT.

MY AWARD WINNING ACTOR-IN-RESIDENCE, LOUIS, HAS AGREED TO DRAMATIZE THE PLAY FOR ME AS A RADIO SHOW WHICH WILL BE UPLOADED IN WEEKLY(-ISH_) INSTALLMENTS.

SO PLEASE JOIN US AS YOU WILL – GROWL FOR BLOOD, LAUGH OUT LOUD, SWOON WITH ANTICIPATION, RALLY FOR THE WINNER, PONDER THE SIGNIFICANCE, AND MARVEL AT……..WILLIAM MARSHAL.

WELCOME TO LONDON 1189 – THE ROMANCE OF THE MILLENIUM IS ABOUT TO BEGIN…BUT FIRST A WORD FROM YOUR DOCENT TO THE MIDDLE AGES: 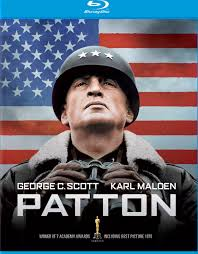 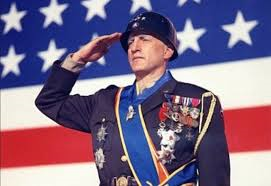 One of, if not THE most, brilliant portrayals of a historic figure (OK Oldman's Churchill makes this a two way tie) ever filmed. General George S. Patton, U.S. military genius, Commander of the 3rd Army, without whom we might easily have been defeated by the Nazis. George C Scott, U.S. acting genius, winner of two Academy Awards and numerous other awards, without whom this movie might easily have been reduced to a forgettable biography.

Everyone, at least every American, eventually, should see this masterpiece. I saw it when I was twelve and despite the language and violence, it facilitated my unadulterated respect, appreciation, and love for our American Military. BUT – because OF the language and scenes of violence and war time brutality, (not nearly as unfiltered as Saving Private Ryan or Lone Survivor though), parents would be well advised to see it themselves to accomodate to their individual child's temperament and sensibilities. 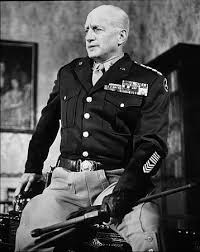 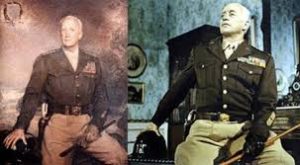 Patton. Some movies are an education unto themselves. No secret messages. No particular underlying themes. Just something to learn from watching. In 1970 I fell in love with both George C. Scott and General George S. Patton at the same time. Both men, geniuses in their given fields of endeavors.

Scott's portrayal of this iconic World War II figure is a stunning example of acting ability. He IS Patton – probably more Patton than Patton himself. This movie inspired an interest in the General that I continued for years. I am proud that General George S. Patton was OUR General. America's hero. Possibly the best American General in our history (possibly equaled by sheer nerve and determination  only by George Washington). Every battle Patton undertook he won. Every plan he pursued was brilliant.

But the man himself, as portrayed in this movie and backed up by the research I did on him in the years after, showed George S. Patton to be a complex man of ridiculously proportioned contradictions. 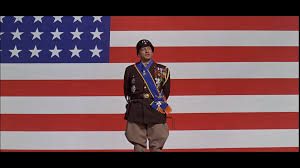 Devoutly religious but verbally profane, he believed "give it to them loud and dirty and they'll remember it". Fought with his men on the front lines but almost courtly in his manner and dress. Reverent of life but in love with death, he wanted to die "by the last bullet fired in the last battle of the last war."

Fiercely loyal to his men 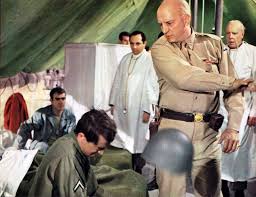 but admiring of Rommel,

his counterpart in the German Army tank division. Devoted student of the Christian Bible but believed in reincarnation. As a matter of fact he believed he had been a participant – often a humble one – in battles dating back thousands of years to the Roman military legions. He even wrote a poem about it, "Through a Glass, Darkly", a poem about reincarnation which harkens (in typical inherent contradiction) to a Biblical quote from 1Corinthians 13:12:

So as through a glass, and darkly
The age long strife I see
Where I fought in many guises,
Many names, but always me.

And I see not in my blindness
What the objects were I wrought,
But as God rules o'er our bickerings
It was through His will I fought.

So forever in the future,
Shall I battle as of yore,
Dying to be born a fighter,
But to die again, once more. (General George S. Patton) 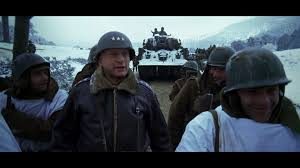 Patton recounts brilliantly the most important slice of life of this larger than life man during his involvement in the latter part of World War Two to its European end. 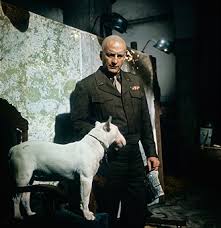 In the process of this recounting, the movie examines not just the man but his strategies, 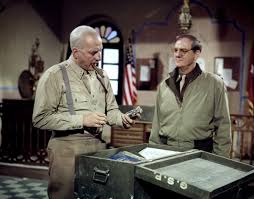 the view the German military intelligence had of Patton, and the horrors of war through the eyes of this man who was both appalled and enamored of it.

There are some people born for (or made by – sometimes hard to tell the difference) the challenge of the time with which they are struggling: Gandhi, Margaret Thatcher, Ronald Reagan, Harry Truman, Winston Churchill, William Marshall, Pope John Paul II. Patton was one of those people.

Watching this movie is a history lesson and a biography.

But be warned – the language is ROUGH. No "f" bombs or any language directly relating to inappropriate sexual encounters. But there is a bucket load of damns, hells, and a few son of a b****, s***, and G-d***. There is NO sex in it whatsoever. His interactions with women are limited to PR talks with tittering elderly British tea drinkers. He was as devoutly faithful to his wife as he was to his country. But if the language offends you or you are concerned for your children then either limit this movie to your older kids or catch it when it is shown on TV. While current TV sports FAR worse language, the TV versions of this movie were edited at a time when auditory sensibilities were more attuned to a gentler culture. In other words – they cut out more profanity than they would today. 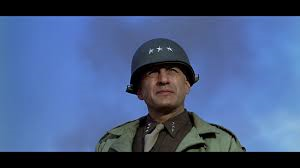