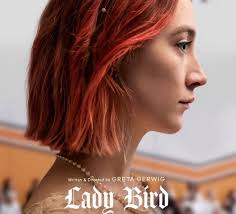 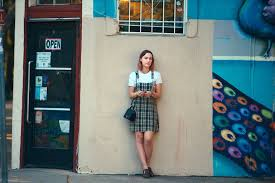 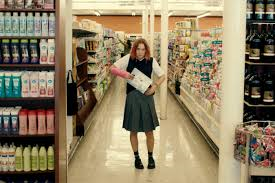 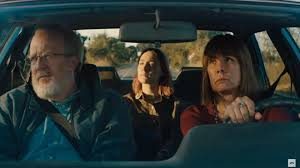 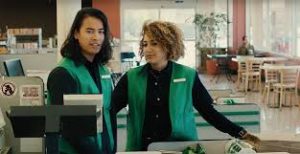 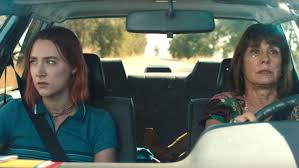 her family which must endure the process with her. 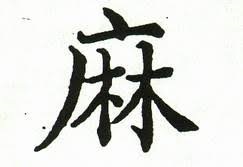 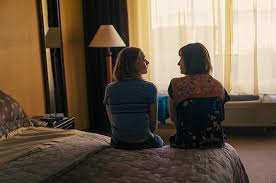 My oldest son pointed out to me that the Chinese symbol for war is two women under a single roof. He would know that because he has four sisters and a mother. And one might keep that in mind when watching Lady Bird. 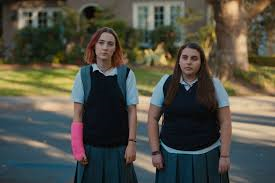 Lady Bird tells the story of a girl (Saoirse Ronan) in her last year of high school who doesn’t know what she wants. 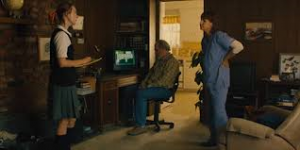 All she knows is that she does not want to be associated with her modest middle-class family or life in her hometown of Sacramento. She even rejects her providentially chosen given name Christine, inexplicably preferring the appellation of Lady Bird. Her father, 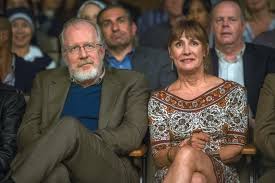 Larry, (playwright Tracy Letts) is kind and sensitive and tries to help her but is older and kind of beaten down by life. Her mother, Marion, (Laurie Metcalf from The Big Bang Theory as Sheldon’ mother and the voice of the Mom in the Toy Story franchise), and she are too much alike to be close. They try but it always ends up in acrimony. They cry at the same things and they spend time with each other, but their relationship is like a mosquito bite, they can’t seem to keep from scratching at it until it bleeds. 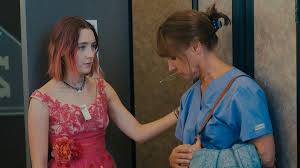 they are shopping for a prom dress for Lady Bird at a discount store. Lady Bird finds what she thinks is the perfect dress. Marion can’t help herself but says: “Don’t you think it’s too pink?” setting Lady Bird off. Additionally, Marion is constantly plagued by money worries and she sometimes takes it out in acrimonious comments to her immature daughter. Example: Lady Bird can’t wait to come home and tell her parents about her first kiss but when she arrives all bubbly enthusiasm, Marion, while not quite going full boar Joan Crawford/Mommy Dearest on her, mercilessly rags on her for not putting her clothes away “properly”. 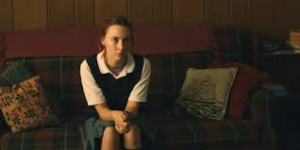 Conversely, Lady Bird, herself, is a big bag of dissatisfaction and teenage angst who longs for the material world, to the point where she thoughtlessly hurts others by what she says. For example: 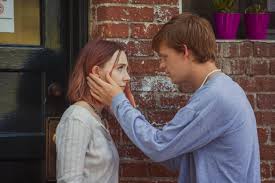 Lady Bird tells her new wealthy boyfriend that she comes from “the wrong side of the tracks,” which the beau artlessly elaborates on when he first meets Lady Bird’s parents, noting with some enthusiasm that he really DID have to cross railroad tracks to get to their house!

The father, Larry, an understanding soul, tries to explain to Lady Bird that she and her mother have very strong personalities. Being a sister, a daughter, and the mother of four daughters, I can tell you the interactions and dialogue are spot-on. 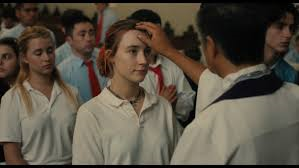 The parents, while not Catholic, fear for her safety and have sacrificed significantly to send Lady Bird to a Catholic School. The school is populated by beautifully and humanely portrayed nuns and priests who are at turns wise and endearingly funny. 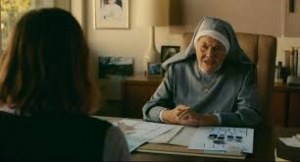 The staff of the school meets occasionally with Lady Bird to give her advice and in a charming scene which reminds me of the old Hayley Mills-Rosalind Russell movie The Trouble with Angels, the Mother Superior (Lois Smith) even “confesses” her amusement at some of Lady Bird’s antics. 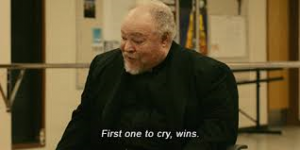 Another time when an older priest (lovingly portrayed by Stephen Henderson) has to take medical leave from his position as head of the Theatre Department, another priest, (played by Bob Stephenson), the school football coach, takes over. The resulting pep talk with the kids as he explains his plan of organization for directing The Tempest is priceless. 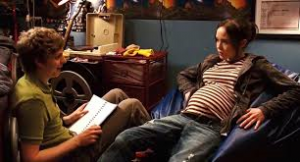 Juno, which involved an illegitimate mother, or 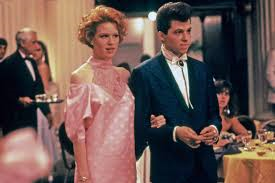 Pretty in Pink, which culminated at a long anticipated school dance or 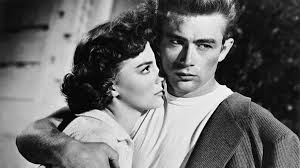 Rebel Without a Cause, which finds its watershed moment of truth in tragedy and death, there is no real catastrophic or milepost moment in Lady Bird. Instead, we watch as Lady Bird slowly matures through her senior year from self-absorbed, conflicted angsty brat into an uneasy but promising adulthood. Not to give any spoilers, but rest assured there is closure to the story and a complete arc. But the significance is not so much in the finish line as the observation of her journey and the companions with whom the trip is taken which is most interesting. 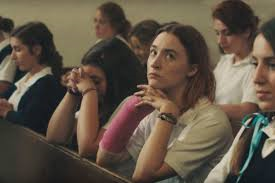 The Catholic Church and the religious who occupy it are refreshingly shown in a very positive, supportive, kind and wise light. Lady Bird is even at times gently framed in shots by crosses and pictures of Our Lady of Guadalupe – not overtly but in fortuitous natural background. 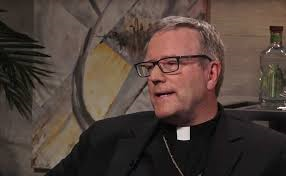 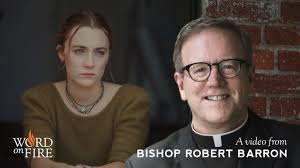 Bishop Barron in his Word on Fire podcasts often reviews movies. I find him extremely insightful. One of the comments he makes about Lady Bird is that he suspects even the Saints might have had troubled or stressful youth and teenage years. And that it is necessary, especially for a strong-willed character, to go through these difficult antagonistic stages before they can become the people that we know. In other words, even Saint Peter, Saint Augustine, Mother Teresa and even St. Pope John-Paul II may have been pains in the butt as teenagers as most people are. But that God worked with and through those weaknesses and foibles to mold them into the brilliantly spiritual people they would become. And He will do the same with us if we give Him a chance. And that the writer/director, 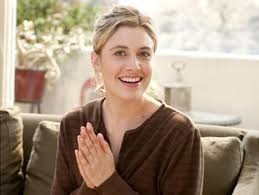 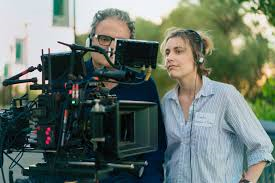 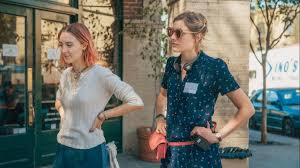 Greta Gerwig may have been showing us what she perceives as the undeveloped beginnings of such an embryo saint, even if she herself was not aware of it.

Lady Bird has garnered a number of awards, including best comedy for writer-director Greta Gerwig and best actress in a comedy for Saoirse Ronan. Every allocade it gets it will have earned.

Cautionary note: there are a few harsh profanities, though not the avalanche that can sometimes accompany films aimed at this demographic. In addition, there are subjects and at least two scenes I would not have wanted to explain to my 15 year old daughter. As a date movie I wouldn’t recommend it for your first.

There is great charm and insight into these obviously well loved characters created by Ms. Gerwig. And much to be learned and appreciated in this textbook example of the Chinese symbol for war, ironically made into a love letter for the turbulent teen everyone must pass through to adulthood.