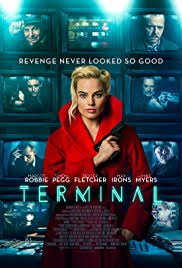 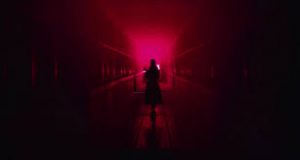 Macabre murder mystery of intrigue and betrayal set in a futuristic 1950's heavily referencing Alice falling down the rabbit hole.

"Terminal" (WITHOUT the article in front of the word, NOT THE Terminal which is a 2004 Tom Hanks dramedy about an immigrant stuck indefinitely in an airport terminal because of political turmoil in his home country) as the title of this 2018 movie, is a play on a number of aspects of the movie. Much of it takes place in and around an 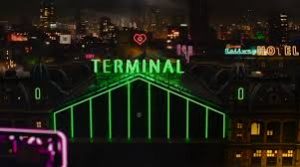 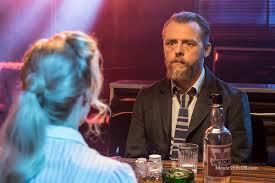 The premise of the movie, written and directed by Vaughn Stein (who has been crew for such disparate movies as World War Z, the live action Beauty an the Beast and Les Mis) follows the machinations of Annie,  played by Margot Robbie who seems to be making a career of playing crazier and crazier women – 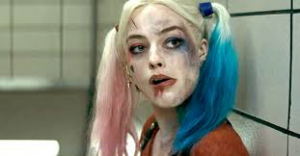 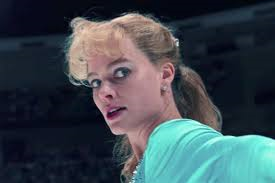 Tonya Harding in I, Tonya, 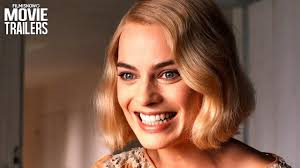 Mrs. Milne in Goodbye, Christopher Robin, and now this. Annie is a professional assassin whose bloody and coldblooded antics might have given even Harlequin a frowny pause.

A reference to the classic nihilistic play Waiting for Godot by  Samuel Beckett may seem like a non-sequitur at this point but bear with me. 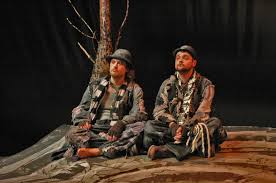 Waiting for Godot is a nihilistic play about two hoboes waiting for a third man who never shows up and in the end they hang themselves because nothing really matters. 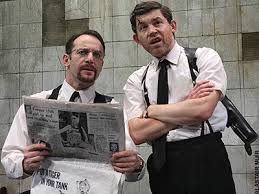 The Dumb Waiter by Harold Pinter harkens back to Waiting for Godot. The Dumb Waiter is about two gangsters waiting in a basement for orders on their next job and sinister unspoken messages that come through a pipe from an unseen manipulator. Both of those plays have an absurdist nature to them imparted in the characters willingness to wait in slavish patience for someone or something which may or may not be evilly playing with them.

I mention those plays because there is a certain element in the atmosphere common to them and to Terminal. 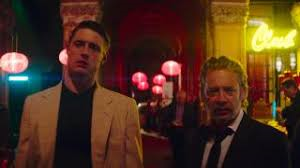 There is even a prolonged and crucial scene in which two hit men (played by Dexter Fletcher and Max Irons) wait in a room for days for orders on their next kill from a client who no one has ever seen. This is more than a passing reference and feeds in to the physical and mental anarchy that pervades this creepy night-lit underground outing. Speaking of which, night and day light play important features too. Hiding in the dark. Things not what they appear to be but hiding in shadows. Frankly, I think the director missed a beat by not filming it entirely in black and white. 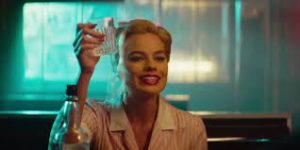 But then we couldn't get the stark and almost shockingly red lips which precede Annie's entrance in almost every scene she's in.

This is a rough and thoughtful movie. But, alas, also a bit boring as its pace is too slow. Much like a walk which should have been taken at a jog, Terminal drags on with too many flashbacks and too much lingering on a single image, like viewing a stake out through the eyes of someone distracted by illness or grief. If it sounds like a depressing movie – well, it is. Not that that should dissuade anyone in and of itself. But there should be a purpose to enduring a movie like this. And satisfying a somewhat predictable series of surprise endings just is not enough. 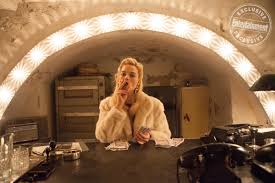 Margot Robbie does her dead level best as a restrained psychopath. 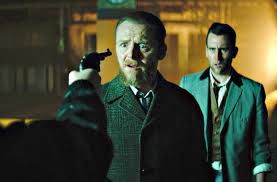 Simon Pegg (Shawn of the Dead, the last few Mission Impossibles, and the new Star Trek's new Scotty), performs the most serious role I've ever seen him in, as the terminally ill teacher. And

Mike Myers (the voice of Shrek himself), who has not been in a feature length movie since  2009's Inglourious Basterds, is almost unrecognizable as a ubitquitous and mysterious janitor who seems to know way more than he should. (It's been so long snce Mr. Myers appeared in other than a voiced part that someone expressed surprise to me not just that he was in such a dark movie but that he was still ALIVE!)

While definitely not for everyone's taste and MOST definitely NOT for other than the older mature audience this is an intriguing movie which is mesmerizing in the same way that some National Geographic specials featuring insects devouring their kill are hard to watch but hard to look away from. There's a lot of profanity, a number of scenes of a sexual nature and some graphic violence as you might imagine in a movie about hit—people.

There are a number of references both subtle and overt to Lewis Carroll's Alice in Wonderland, including outright quotes from his book. Thematically there is chaos, bizarreness, unpredictability, people being often both "bigger" and "smaller" than you might have thought they were in the beginning, and even the familiar and most obvious Alice in Wonderland trope of an actual hole in the ground. So I don't think it would be inappropriate, as Alice might have said, for my final words on this film to be …. curiouser and curiouser. 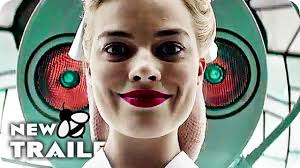