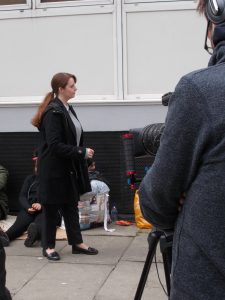 A little over a year ago I created a post alluding to a short I had written for a competition. While the competition fell through a 6 minute video was produced by a truly lovely man named

Robert Campbell through his business CCS Video in England. Also volunteering their time and talents were 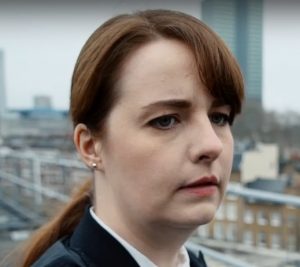 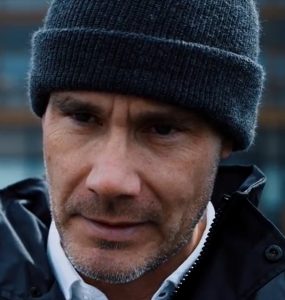 Kristian Evans as lead actors and 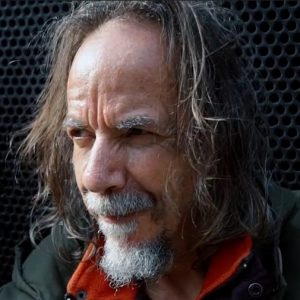 Tony Maas in a supporting role. My dear friend 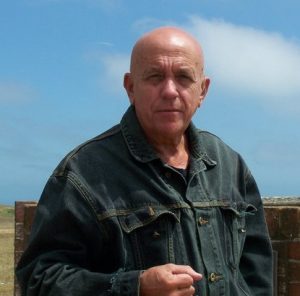 Stuart White (published author and screenwriter par excellence – see his page on us.imdb.com which has only some of his accomplishments) and his best friend, the incredibly clever and brilliant photographer, 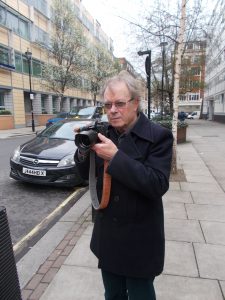 Dave Thorpe graciously and generously showed up to lend support and encouragement as my representatives, as the trip to England for this was just not practically possible for me at the time. Also lending their time and talents to see this project to fruition were: aerial cinematographer and production assistant Roger Allen, assistant director and sound engineer James Skinner, production assistant Michael Winborne, composers Dimitrs Keramidakis, and Enrique Cervera, as well as the kind cooperation of City West Homes. 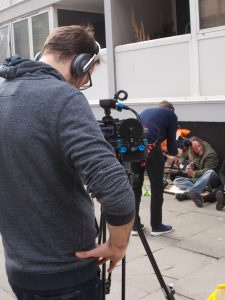 I will be grateful to all of these people – most of whom I will likely never meet – for the rest of my days, for bringing to life the singular vision I had and breathing life into characters which were only ephemeral specters in my head and words on a page, until these wonderful people created this brief moment which I now share. 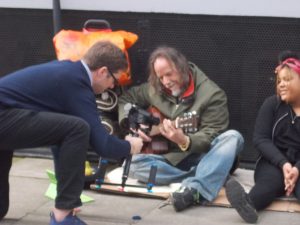 While it is too large to place on this blog, the site for accessing this film is here: Neverland.

Please send comments and let me know what you think. 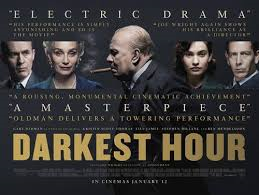 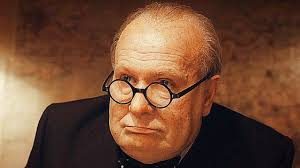 Gary Oldman is positively brilliant in Darkest Hour as Winston Churchill from the days leading up to his election over the Hitler-mollifier Chamberlain, through his creation and initiation of Operation Dynamo for the miraculous rescue of the British army from the beaches of Dunkirk.

Have you ever gone back stage of a Shakespearean play? It is fascinating to watch how the cast and crew plan and execute a thousand little decisions which serve to bring to life a play with the grandeur and majesty of a brilliant and noble concept.

Similarly, Darkest Hour brings you behind the scenes as Churchill is chosen to replace the cowardly appeaser 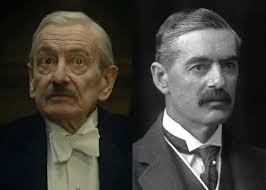 Neville Chamberlain as Prime Minister of England. It follows, often through the eyes of his newly hired 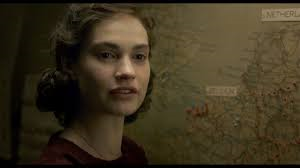 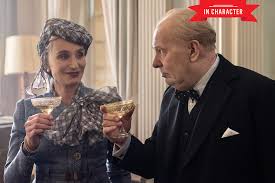 Clemmie (Kristin Scott Thomas) as he wrestles with the moral and practical prospects of how to face the terrifying Nazi juggernaut plowing through Europe and looming over England.

Everyone around him – both his friends and his allies – urge him to sue for peace. But Churchill, the historian, knows the desperate and fatal folly of this kind of naivete. 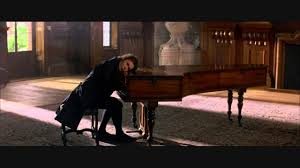 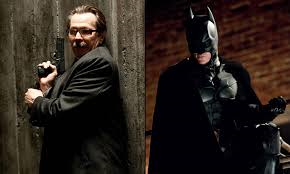 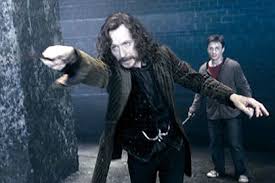 portrays this man who had the face and stature of a garden gnome, the personality and charisma of a Notre Dame coach, the wit and pragmatic humor of Benjamin Franklin, the instinct for military strategy of General Patton, and the courage of a lion. 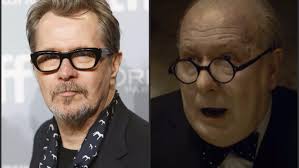 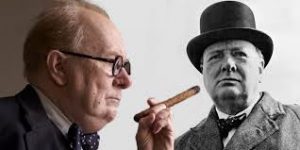 Not portray – Oldman, for just those two hours and five minutes – IS Churchill in one of the finest performances I have ever witnessed. Oldman brings both the brass and nuanced, the private and public, the overbearingly confident and the heartbreakingly doubtful Churchill before us to contemplate, sympathize with and witness intimately.

Edmund Burke, a member of British Parliament once said: "A representative owes the People not only his industry, but his judgment, and he betrays them if he sacrifices it to their opinion." 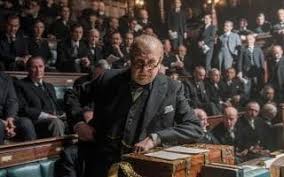 Churchill had to stand his ground while politically he was ultterly alone against opponents and allies alike who would have had him "negotiate" peace with Hitler, a peace which would have brought it under the heel of the Nazi Regime and possibly allowed Hitler a foothold in the world from which we could be struggling against to this day.

Winston Churchill, statesman, accomplished amateur painter, army officer, historian, and Prime Minister of the United Kingdom during the entirety of World War II, thankfully truly understood history. His writings include a six-volume memoir aptly titled The Second World War and another massive four-volume set of tomes covering the period from Caesar's invasions of Britain 55 years before the Birth of Christ through to the beginning of the First World War. Much like Churchill, himself, the title of this latter set – A History of the English Speaking Peoples – is both humble in its simplicity and breathtakingly presumptuous in its implied scope.

On the one hand, Churchill was indeed a humble man – frank about his own shortcomings, unafraid to tell the unvarnished truth and as full of plain spoken witty quips as Benjamin Franklin. And yet he dared, his entire life, to prepare to become Prime Minister of one of the greatest countries in the world. 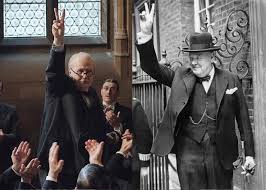 And as God places men in the positions they must be in at the time they must be in them no matter their humble beginnings – King David, Joseph, Moses – so He, in His Mighty wisdom, placed Winston Churchill at the helm of the country which stood in the front lines against one of the greatest evils the world has ever known. 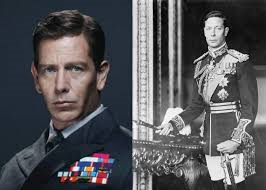 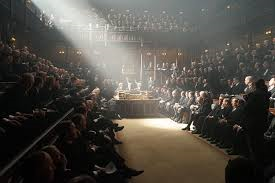 boldly confronted the Nazi juggernaut before America could be persuaded to launch into the fray and despite the fact that Europe appeared to have been lost under the heel of the Gestapo and the Luftwaffe bombings. Churchill stood at the forefront of England against the tide of so-called leaders like Chamberlain, who would have had England knuckle under to terror and tyranny. Churchill put it succinctly in the film: "You cannot reason with a tiger when your head is in its mouth!"

The writer of Darkest Hour, Anthony McCarter (The Theory of Everything) gives us both the big historical picture and 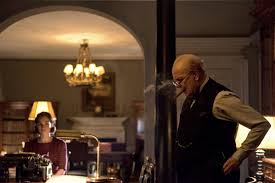 the intimate portrait of the man as Churchill crafted speeches, and formed opinions with and around his secretary, his devoted wife, his closest confidants and his King. 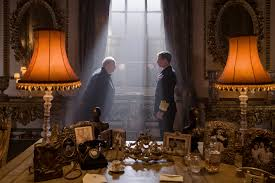 And despite the fact we, as the audience, KNOW the outcome of this all, we are masterfully presented with the story in such a way that it is intensely suspenseful – as though we are seeing this all for the first time and, more, that we are participants in this world on the brink of conflagration. 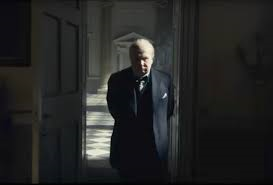 To aid this sense of intimacy and first hand experience, the director Joe Wright (Atonement, Pride and Prejudice) does some amazing things with the camera work and framing. For example, there is a moment when Churchill is contemplating the disastrous situation for the vast majority of the British army trapped across the Channel at Dunkirk against the approaching German army. The camera focuses on Churchill as a dark door in a shadowed room slowly shuts leaving a small window in the door as a frame around Churchill and the only light left coming from the next room. This highlights not only the isolation Churchill must have felt but brilliantly visualizes the fact that Churchill WAS the lamp that would light England and ultimately Europe and the world out of the darkness that Nazi Germany’s shadow had cast over the civilized world.

There is also a filmatic motiff that plays frequently throughout the film. The focus goes from a close shot of a single individual straight up to present a panorama of the surrounding countryside wherein the individual is lost OR starts from above and closes quickly down upon a single individual. This imagery served to link the plight of each individual player in this drama to the massive worldwide stage drama being historically played out. It also, in reverse, helped remind the audience that behind the grand machinations of famous and encyclopedia worthy heads of state was the suffering and sacrifice by every day ordinary nameless soldiers and citizens. Each individual is important, yes, but often the hard tough decisions MUST be made with a blind eye to that in order to save a greater number of people, a country or even just an ideal. Both of these ideas are presented hand in hand seamlessly like the entwining of the fingers of newlyweds in an intimate moment.

The director conjures the interweaving of the big and small moments which make up history. For example, in one scene we see Churchill striding through his house with entourage in tow strategizing but then immediately coming up short and 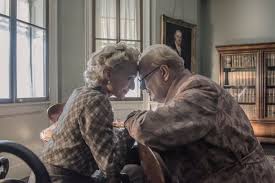 dismissing everyone in short order to have a charming and adorably intimate conversation with his wife Clemmie when she chides him about the household finances.

We are shown Churchill the man as well as the statesman, just as while we see England the country we also hear from the individual citizens that make up the population as 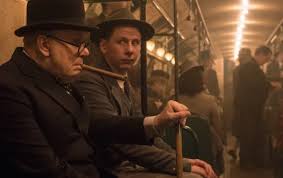 Churchill does a Henry V-type walkabout amongst the people he is trying to lead.

Churchill once said: "Success is not final, failure is not fatal: it is the courage to continue that counts." Churchill rallied his nation, inspired his countrymen and helped lead the world to victory against Hitler. And he did it by the simple expediency of never giving up – an important and inspiring example for us all.

I would LOVE to see Darkest Hour shown on a double bill with Dunkirk.