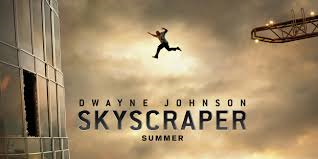 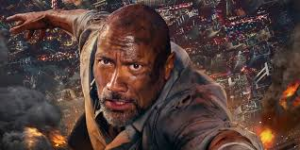 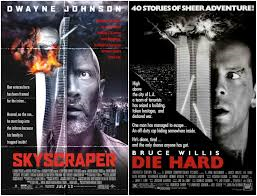 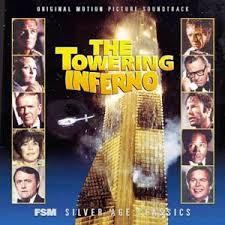 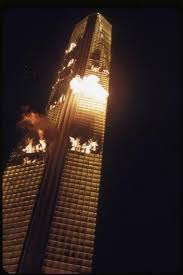 Appropriate for young teens and up as long as they don't have an extreme reaction to suspenseful height scenes.

I have this recurring nightmare. I'm stuck on an elevator HUNDREDS of stories up. This is bad to begin with as I don't like the idea of being in a closed sealed box suspended  at a lethal height by a mere cord of wires. (Think of that next time you enter one of those muzak filled closets with the automatically closing doors.) THEN it starts to SWAY. Never mind the illogic of there being no room for it to move that much in the chimney into which it is built. THEN the walls fall away and I am left suspended high in the air with nothing to hold onto. THEN…well you get the idea. So it should come as no surprise that sitting through 102 minutes of Dwayne Johnson leaping off a crane,

clinging to the sides of a 225 story building, and 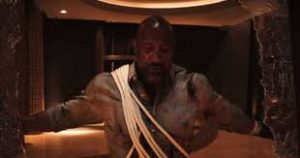 standing at the edge of a broken window TWO HUNDRED PLUS STORIES UP A BURNING BUILDING, my hands literally sweat.

The special effects, big and 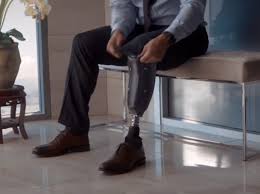 small are pretty spectacular and the construction of 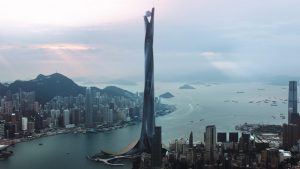 the imaginary, twisty, megatall tower known as the Pearl was gorgeous and deliberately designed as a realistic possibility. Rawson Marshall Thurber, the director and creator of the Skyscraper story said he always wanted to film a fun action adventure movie and aiming for a a quality product, hired Adrian Smith, who was the Chief Architect for the construction of the Burj Kalifa in Dubai, to design the fictitious Pearl.

The Burj Kalifa is currently the world's tallest building, at 2716 feet. That's sightly over half a mile — STRAIGHT UP!

For anyone who complains about the formulaic nature of action adventures, consider that everyone has a favorite recipe. 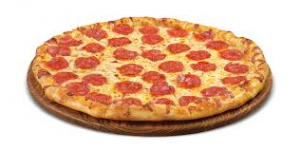 When you go to the kitchen to make a pizza you expect to come out with something recognizable. 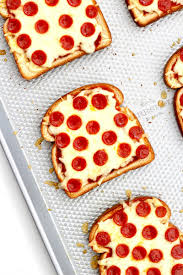 Oven baked dough with tomato sauce and cheese, veggies perhaps and meat on it. 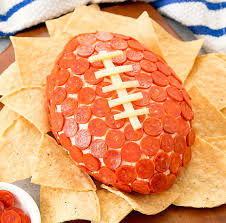 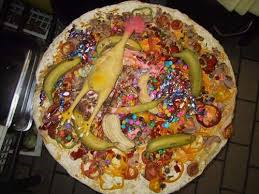 add pineapples or shirmp to your pepperoni and mozzerella, 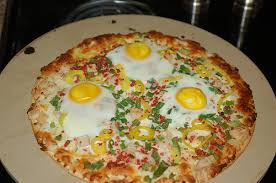 you're going to want a pizza which looks like — a pizza. No one is likely to plan woven banana skins topped with guacamole and deep fried tulip bulbs. Formulas work for everything from prescripton medicines, baby food, and concrete to souffles, gunpowder, and lawnmower fluid. If you change the formula it might not work. 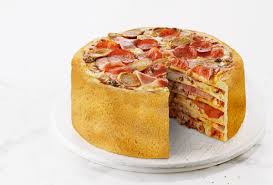 If you change the ingredients in a pizza too much, 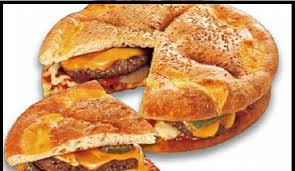 after a certain point it is 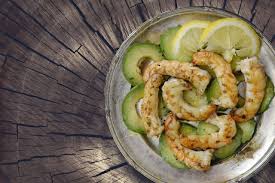 no longer a pizza. So why shouldn't movies be permitted the same comfortable premises?

And Skyscraper dishes up a good recipe of disaster adventure.

The premise is that 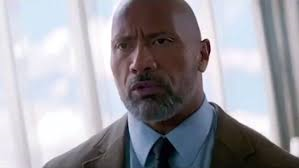 Will Sawyer (Dwayne Johnson), former FBI hostage negotiator and now owner of a security evaluation firm, is hired by billionaire

Zhao (Chin Han from everything from Captain America: Winter Soldier to the TV shows Fringe and Blacklist) to report on the safety measures for the Pearl in order to acquire insurance before his mega structure is open to the public. As anyone who has seen the trailer might know, someone with inside knowledge and an unknown agenda sabotages the cloud high building,

trapping Sawyer's family inside 100 stories up, as the villains set it ablaze. 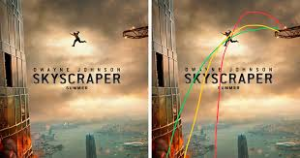 there are things the Rock does in this movie that are really impossible. 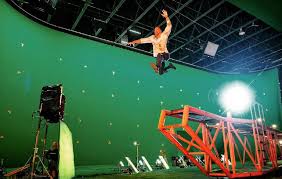 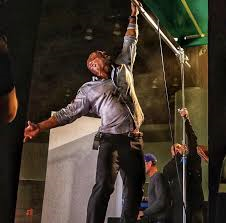 in the falls and impacts they survive, the jumps they make, the speed with which they get places, their proficiency with machinery and weapons, the ability to shrug off injuries, the plain old serendipitous sheer luck they have, the endless supply of bullets in their guns, the inexhaustible amounts of energy and strength they possess. 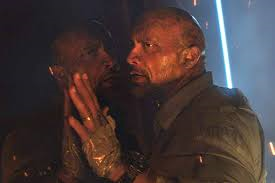 But —- come on guys, this is a popcorn movie. Just sit back, don't over complicate things, and root for the home team.

The special effects are spectacular, the plot is interesting and believable even to the design of the skyscraper itself and its security features. 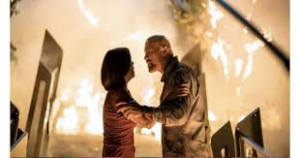 The family dynamic is admirable of a married and devoted mom and dad willing to do anything to protect their children.

I thought of doing a formula list of action adventure movies but thought it would be more apt and interesting for this one to do a list of prominent, specifically Dwayne Johnson, movie ingredients. And notice that some of the items in the Dwayne Johnson formula includes what is NOT in the usual movie, just like one might mention that you do not usually find banana on a pepperoni pizza.

2. DO NOT INCLUDE sexualized nudity, blasphemy, insults to Judeo-Christian theology, denial of God, inappropriate sexual activity, and graphic displays of violence.


3. DO NOT INCLUDE heavy doses of profanity. 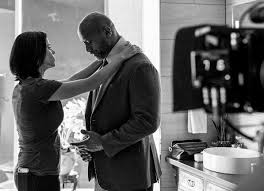 4. ARE respectful of women.


5. DO INCLUDE helicopters. He flies one in both Rampage and

San Andreas, avoids being killed by them in Skyscraper, and is a passenger on one in Jumanji 2

6. DO INCLUDE having to contend with something much bigger than himself. In Rampage it's a gorilla. In Skyscraper it's a skyscraper. In Jumanji 2 it's an entire world into which he is absorbed. In San Andreas it's an earthquake.

7. DO INCLUDE children and his protection of them. 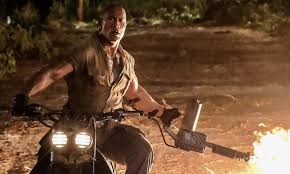 9. DO INCLUDE climbing up really big, tall things. In Jumanji 2 it was trees. Skyscraper has a skyscraper. Rampage had lots of city sized debris with which to contend.

10. DO INCLUDE humor in even dire situations.


11. DO INCLUDE being a team player and trusting others' abilities, not trying to do everything himself.

Skyscraper gets a score of 100% on all these points.

inside man, who I will hint at here with the picture but not reveal. Not only did his reasons for betrayal ring hollow and were unsupported by back story, but his responses, when things go pear-shaped, seemed far too unrealistically callous for someone as trusted as he had been. 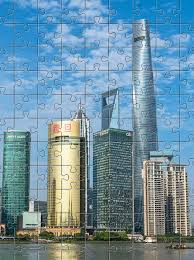 Everything else fell neatly into place like pieces in a familiar  jigsaw puzzle.

Although there is zero inappropriate sexuality and the most romantic anyone gets is the married couple kissing hello and goodbye, the violence is extreme, though not gratuitous. No real gore is shown. More "Cowboy and Indian"-like shooting, where you aim, fire and the bad guy goes down. Lots of fire and explosions and suspense. A few bad words and one explicitly used "ef" word. But the height scenes would induce vertigo in the Flying Wallendas, so be warned.

So Skyscraper, while it is NOT for the avant garde-taste afficianado, if you're looking for a good old fashioned, satisfying serving of action adventure, this is the  restaurant…I mean … movie to go to.