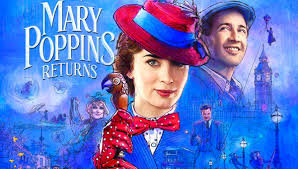 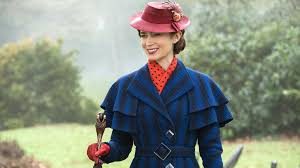 Emily Blunt knocks it out of the ball park in an otherwise flawed descendant of the original and timeless classic: Mary Poppins.

Older kids with the presence of their parents to explain some rather egregious character flaws and plot points. AND be advised of some questionable lyrics during a “Dance Hall” scene; but they go by so fast I do not think most children will have any idea what they are saying, though they are easy enough to find online.

Nothing can replace Mary Poppins. But one might have hoped a successor would have met Mr. Disney’s approval. Unfortunately, Mary Poppins Returns falls short of that expectation.

On the PLUS side, Blunt is amazing. Taking on a roll as iconic as Julie Andrews’ Mary Poppins takes real guts . Doing it well takes real talent. But Blunt soars with the part – “up to the highest heights!” managing the same panache which Andrews brought. Blunt adds a certain individuality but without losing any of the impish charm and magnetic self confidence, optimism, and demeanor of wisdom that exuded from every pore of the 1964 Mary Poppins character. The prim, stern and no nonsense exterior hiding the old soul and the big, soft, kind and wise heart within is all there as you might remember her.  Blunt sings, dances, comports herself with the personality, body language and all the expressions of her sister Mary Poppins from 1964 but still manages to make it her own iteration.

For example, Blunt adopted a fun vocal pattern reminiscent of Andrews’ prim, proper, posh and practically perfect in every way Poppins accent but tweaked it with her own unique style, describing her choice as a combination of Rosalind Russell’s patter in His Girl Friday and Princess Margaret. It is an unusual combination but I thought it worked really well for the evocation of the worthy successor to the Poppins throne.

I love Blunt’s take on Mary Poppins (could you tell?). And I’m not alone. No less an authoritative personage than Julie Andrews weighs in and was apparently quite pleased with Blunt’s performance. So impressed was she with her young successor to the umbrella that when offered a cameo Andrews graciously declined saying she did not want to distract from “Emily’s show”.

As Jane and Michael are grown, this updates the setting from turn of the century to a time just before World War II. 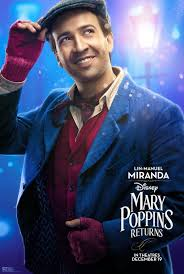 Lin-Manuel Miranda is Jack, the faithful and ever-present chimney sweep who sings, dances and escorts Mary and the children around London. Meryl Streep is Topsy, 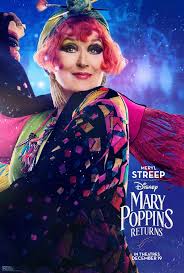 Mary’s cousin with strange house problems. The colors are vibrant, the singing strong and done by the actors, not subbed. These are all to the good.

The premise of Mary Poppins Returns, however, is ridiculous. And I’m not talking about the idea that a nanny can fly on a kite, or that her cousin’s entire house turns upside down every other Wednesday, or

that there is an entire ocean through which they can swim and breathe and sing and play in, in the bathtub, or

that they can enter the painting on a ceramic bowl in the children’s room. That is all the stuff of Mary Poppins and well within her universe.

The problems I have are with the “real” world in the movie. This Mary Poppins is dark: Michael’s wife is dead, he is about to lose the family home, the bank they relied on is corrupt, Mary Poppins goes “native” at a dance hall, one of the children is kidnapped by animated animals with a frightening (for small children) chase including fire and falls and overturned carriages, and the weather is often threatening.

The characters have massive flaws which should not be there. For example, the movie begins with Jack riding about town singing Underneath the Lovely London Sky on his bicycle, then…steals an apple. What kind of example is that supposed to teach children in a supposedly child-friendly movie? Much criticism has been flung at Dyke’s British accent but one of the reasons Disney hired the famous hoofer in the original for Bert was his compatible world-view of the entertainment business. Both were concerned about the sliding descent of values being reflected in movies even then. I do not think Mr. Disney would have thought much of the first impression of  Returns chimney sweep.

In the original Mary Poppins, Michael is, according to Mary Poppins, “extremely stubborn and suspicious”. He is full of mischief and outspoken. 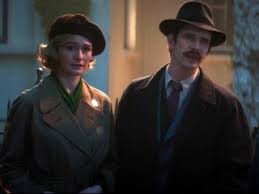 In Mary Poppins Returns we find the same Michael (Ben Whishaw – voice of Paddington Bear in Paddington and the adorably geeky new Q in Skyfall) has grown up to be a pathetic loser who can’t seem to hold down a full-time job or get over the death of his wife, even to support his three children played by 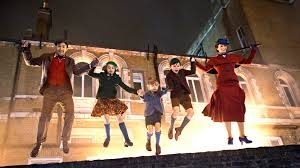 Pixie Davies, Nathanael Saleh and Joel Dawson. Michael’s sister Jane as a child was “Inclined to giggle. Doesn’t put things away”. She is a little shy and somewhat prim always trying to keep her brother in check. Now, as an adult (Emily Mortimer – The Kid),  she has, anachronistically, become an outspoken, pants-wearing labor organizer at a time when women maintained a far more genteel decorum.

Furthermore, it stretches credulity more than a talking parrot to believe that 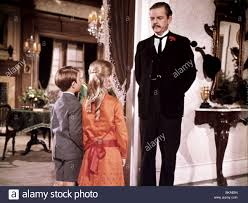 Mr. George Banks, Jane and Michael’s father, (David Tomlinson) who we met as a very savvy, responsible and thrifty investment banker, has died leaving both the children with no financial security whatsoever aside from ownership of the family home,  apparently without instilling in them any world-wise life advice whatsoever, without being sure they are very aware of the bank shares or…other assets the family has (revealed later). WHY would he keep this a secret?!

As a result of both his incompetence and ignorance, barely-employed-artist Michael is on the verge of bankruptcy with a budgetary plan which includes having his wife and children scrounge just to obtain old bread for the table. I was actually insulted by the idea that the pater familia Mr. Banks of the original story would have raised his children so poorly.

In the original Mary Poppins George Banks is reminded that he is engaged at the bank to provide FOR his family, not instead of engaging WITH his family.  This did not mean he threw out all concepts of responsibility. 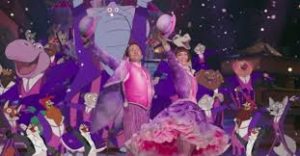 there is no universe in which Mary Poppins would have taken the three Banks children to a dance hall where she would dress and sing like an extra from a PG version of Chicago and perform a song featuring lyrics about how it is tough to tell whether a naked woman is rich or not, and about a wooden naked woman who sprouted seedling when “Mr. Hickory took root despite her bark”. Are we making light of a cleverly worded analogy for a forced sexual encounter? In a children’s movie? These are not lyrics I really would want my young children repeating.

In the original Mary Poppins the bank managers are honest men of integrity who genuinely want to help the Banks’ family children learn thrift and economics. 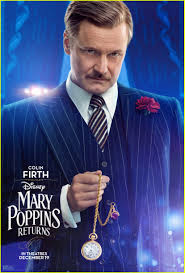 In Returns Colon Firth is a corrupt bank administrator, Wilkins, who probably should be twirling a handle bar mustache like Snidely Whiplash rather than sporting a pencil-thin one. His business model consists of bending rules to rob customers out of their homes, including the Banks’. Unless you are a card carrying Socialist or completely ignorant of banking practices, you would know that banks make their money on INTEREST paid by people who borrow from a bank, NOT from keeping a stable of foreclosed houses. Most of the time banks LOSE money on foreclosures. And in some places they are not allowed to sell the home for more than the value of the mortgage. So HOW, as Wilkins claims, they have doubled profits foreclosing on their customers’ homes is a financial improbability verging on the ludicrous and just plain old STUPID.

While the singing is excellent, the songs themselves get redundant. In the original 1964 Mary Poppins, each of the cheerful songs had a specific identity. Chim Chim Cheree did not have the same feel or rhythm as Let’s Go Fly a Kite which was distinctly different from Supercalifragilisticexpialidocious. However, in Mary Poppins Returns the 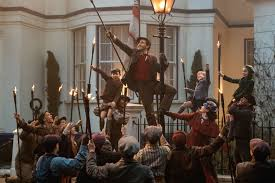 Trip a Little Light Fantastic feels the same as Turning Turtle which is hard to recall differently from Nowhere to go But Up. They are cute but I do not suspect many left the theater humming them. Lovely London Town was very nice and The Place Where the Lost Things Go was touching, but again, nothing to write home about.

And while Mary Poppins was almost officious she was never condescending or cruel. But in Mary Poppins Returns the leeries (chimney sweeps)  risk their lives to climb the outside of Big Ben to push the clock hands back – which technically is cheating and potentially creating problems for other people – in order to buy Michael and Jane enough time to get to the bank before midnight with their bank shares. But when even Jack can not make the last leg of the trip up, Mary Poppins simply floats up with her umbrella to efficiently push the hands back 5 minutes making us all wonder why on EARTH she didn’t do that to begin with, making the leeries courageous and very dangerous attempt pointless.

The movie has no character arc. The Banks family members learn nothing except where the family inheritance is.

There is a delightful cameo and a tie-in to the first movie that resolves the money problem which I won’t reveal until the end of this review so if you want to be surprised don’t read any more. I will say the small part alone was worth the price of admission. But this cameo-ex-machina, like Mary’s float up to Big Ben, makes what the Banks family endured just cruel. The resolution is revealed in a charming surprise near the end, which presumably Mary Poppins knew about, which, again, makes all the trials the family endures pointless and cruel.

In addition, there is a point by point reinventing of pretty much every scene in the original. I am all for a homage or two, 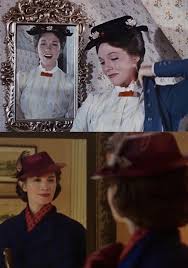 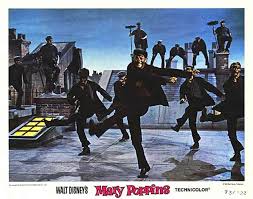 Light Fantastic was just a rehash of Chim Chim Cheree. 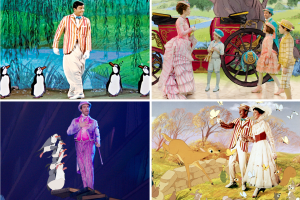 Travel to the Royal Daulton Bowl was even drawn in the style of the jump into the chalk drawing from the original, with the only creative aspect being lyrics inappropriate for little ears. 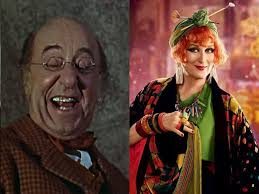 Topsy was a reimagined Uncle Albert with both scenes ending up on the ceiling. In both movies the main plot point takes place at the bank late at night. 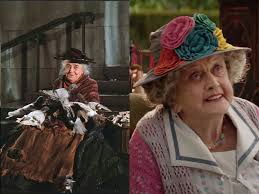 And although I am delighted for the casting of the balloon lady as Dame Angela Lansbury, she was just another form of Bird Lady from the first movie.

Overall I enjoyed the movie despite all this but do not think I could recommend it for small impressionable children. It would likely be OK for older kids who would understand the flaws in the plot and characters when explained to them by parents. Blunt’s performance is amazing and the cameo revealed in the following photos was my favorite part of the movie.

BEYOND HERE BE A BIG SPOILER!!

Yes, that IS Dick Van Dyke, Bert from the first movie and at 91 years old did HIS OWN DESK TOP DANCE!!! 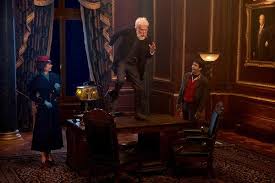 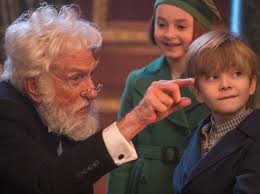 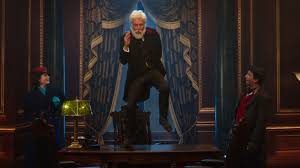 But how HE fixes the Banks’ financial woes is a spoiler even I won’t tell. You’ll just have to watch at LEAST the last 10 minutes of the movie as no one can tell this story better than Dick Van Dyke.