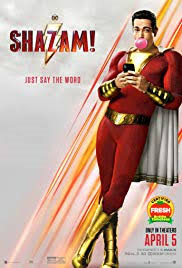 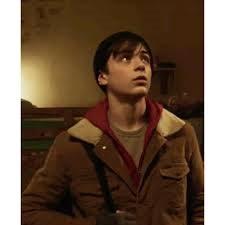 Adorable view of the super hero world from the POV of its most ardent demographic – the barely pubescent teenaged boy.

Mid teens and up because of “boy” language with a large helping of the English word for “merde” and a couple of crass throwaway lines. All totaled this movie is only 30 seconds of cuts away from a G rating. 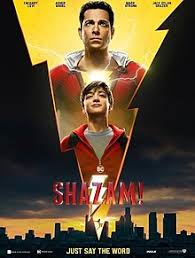 In age swapping movies like Big or 13 Going on 30 or the most recent Jumanji: Welcome to the Jungle, wherein you briefly meet the characters then spend the bulk of the movie with the doppleganger(s), by the denouement, when the original versions re-emerge, it’s a let down because you miss the avatar with whom you have explored the character arc.

Director David F Sandberg wisely chose a different structure and the writer, Henry Gayden did a very good job of neatly bouncing back and forth between the two, so you never lose attachment to either. Shazam feels like a buddy movie wherein the buddies are the same person.

I have often maintained that men have an easy time accessing their inner child and Shazam makes my point in spades.

Zachary Levi (voiced Finn for Tangled and a cross between Peter Pan and Robin Hood as Fandral in the last two Thor movies) brilliantly channels his inner pubescent in Shazam, endowing his Shazam with all the sheer joy and wonder of a youth just discovering powers he didn’t know were possible (apt and clever analogy for maturation anyone?), but recognizing that this super hero is still just an inexperienced kid.

A lot of movies featuring kids have really cringy moments, either from bad acting or bad writing from people who, apparently, have no kids and don’t remember what it is like to be a kid. Star War: Phantom Menace, A Wrinkle in Time, and After Earth all come to mind.

Asher Angel is great as the foster kid who is the surprised recipient of these gifts. 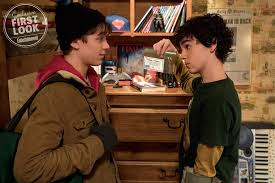 I have two sons past this age now as well as a brother, husband and a torrent of boys who have graced our house as friends of all six of our kids, and Angel is, on the screen, as Billy Batson.…… a kid. 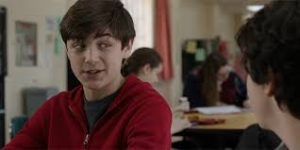 No posturing, no trying to play older than he is, just a young teen who plays a young teen. And he does it beautifully: funny, intelligent, wide-eyed one minute and pretending to be worldly-wise the next. 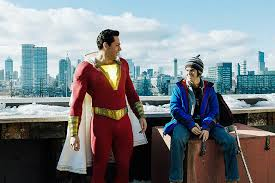 Jack Dylan Grazer is his best friend Freddie Freeman and, 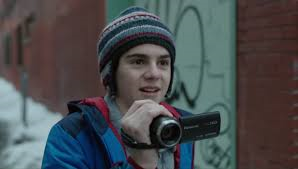 while echoing his obnoxious character from It, does a splendid job of being … an obnoxious kid. 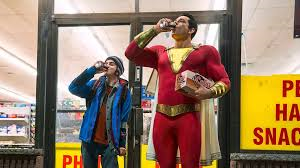 Together Grazer and Angel…and Levi and Grazer are kids

who do thoughtless, selfless, stupid, heroic, sly, blunt, brave and courageous things – often within minutes of each other. 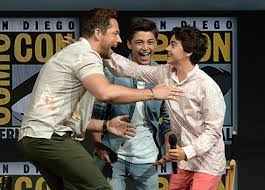 The three of them have great chemistry together and are a lot of fun to watch.

Billy’s foster siblings: Faithe Herman as Darla, Grace Fulton as Mary, Ian Chen as Eugene, Jovan Armand as Pedro, do great jobs as well in the supporting cast of kids, and each are given their moment to shine. 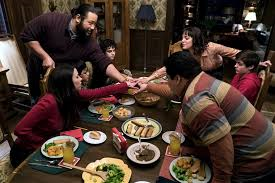 The adults like Marta Milans and Cooper Andrews’ foster couple who care for the kids are treated with respect and shown as good role models and caring people. 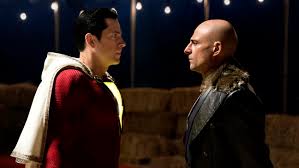 Then, of course, there is Dr. Sivana, the bad guy, played by Mark Strong (both Kingsmen movies and Downey Jr.’s Sherlock Holmes), who hams up his super villain with a horde of evil minion gargoyles,  creating a sense of menace but with just enough camp to take the edge off and prevent the movie, despite some cartoon-horrifying scenes, from going down the Dark Knight path. Solid actor that he is, Strong confidently takes Dr. Sivana to the edge of that envelope without ever ruining the good time for the audience during his haunted house-like scenes. This is, after all, a mostly teen-intentioned super hero movie.

From the Superman theme, to Rocky‘s “Eye of the Tiger” and Queen’s “Don’t Stop Me Now” the songs interlaced with the soundtrack work to create an upbeat mood and place. 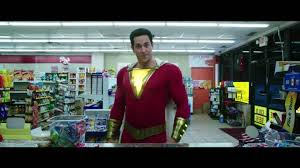 The style is a combination of realistic with comic book colorful and no holds are pulled in recognizing how ridiculous his costume at first appears (can’t resist this quote – the first night Batson transforms, talking to Freddie: “Super powers!? Dude, I can’t even figure out how to pee in this thing!”) 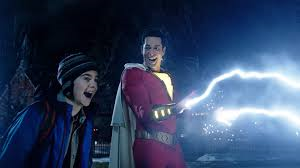 As I alluded to above, Shazam can easily be seen as an allegory for a youth, who is just coming to terms with the demands of adulthood, newly encountering “powers” for which he must assume responsibility, and battling – wait for it – the Seven Deadly Sins represented by one of each of the gargoyles!

It is hard to believe that Wonder Woman and Shazam! are in the same universe, so vastly different are their tones. Be that as it may, along with Wonder Woman, D.C. FINALLY now has another big success in the super hero genre. So, as Gomer Pyle might have exclaimed: SHAZAM! (couldn’t resist that either). 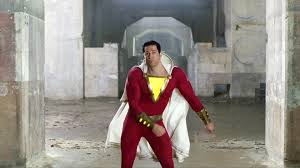