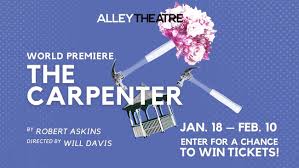 Clever, amusing and dark comedy of errors, Texas-style, which would have benefited from a couple more runs through the drafting process.

Adults ONLY for gratuitous profanities and bawdy behavior.

The Carpenter, making its world premiere run now through February 10, 2019 at the Alley Theater in Houston, Texas is a clever but flawed play. Written by Houston’s own

Rob Askins as part of the Alley’s All New Festival in 2017, the play is a loose — a very VERY loose version of Mark Twain’s The Prince and the Pauper – though that is only my observation. I did not see that reference in any of the interviews with the playwright. 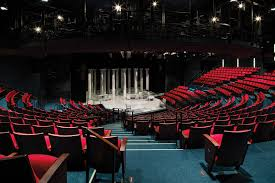 First let me say that the Alley Theatre is a 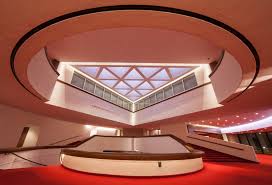 GORGEOUS venue where there are 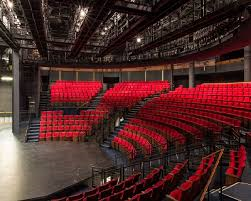 NO BAD SEATS! And I admire the Alley for staging and lending so much time and effort to new innovative plays. 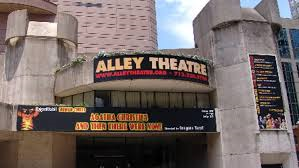 So kudos and plaudits to one and all involved with this production. 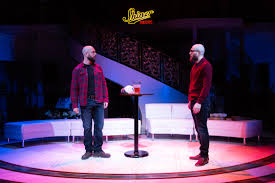 The story is about two half-brothers who meet for the first time as adults in a bar. The older brother, Gene, is a hard drinking, womanizing, bad-decision-making ne’er do well who introduces himself to the audience Our Town Stage Manager-style at the beginning of the play with a soliloquy espousing his own personal, somewhat profane, world view. The younger brother, Dan, is an up and coming programmer about to make the sale of his life. 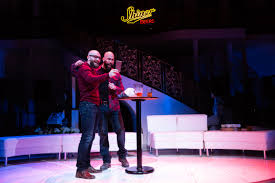 Despite never having met they bear a significant resemblance in the way they look and dress and their personal preferences in beer. Dan lets slip he is getting married that weekend and with vague promises of getting together again some time makes  a hasty retreat. Gene, slyly winking to the audience, justifies his ominously referenced future actions with an analogy about the envy one primitive must feel for his sibling who has learned to climb, being able to thereby achieve a spot closer to the sun. 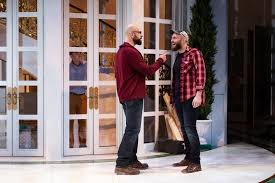 Gene’s predictable and unwanted appearance at the pre-wedding festivities in Dan’s soon-to-be in-laws, very posh, Dallas, Highland Park home, is compounded by Dan’s humiliation-inspired fabrications about Gene being the Carpenter who will build for his bride, Terry, a gazebo for the wedding.

I won’t tell more above the SPOILER warning sign because I don’t want to ruin the fun for those who want to be surprised, but I suspect Mr. Askins, to his credit, was informed in his plot choices by many of Shakespeare’s comedies of error and mistaken identities.

Before I launch into a Cinema-Sins style critique let me advise that The Carpenter IS a lot of fun and I enjoyed the romp, but was frustrated by the fact it could have been so much better.

BEYOND HERE BE SPOILERS

I understand the desire modern playwrights have to make cheap emphasis with expletives and even bawdy sexual references, but the plethora of them in this play is not only lazy writing and off putting, but undermines those moments when a carefully chosen profanity or innuendo might have had the impact the author was looking for. 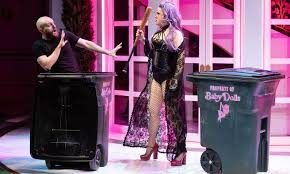 But by the time those chosen moments arrive we are numb to any effect.

The stage was gorgeous. I was not privy to the script so do not know how much of the stage craft was dictated by the playwright’s instructions and how much was the director’s responsibility. On first glance it was stunning. A bright white, elegantly appointed living room with an embarrassment of evidence that a wedding was being planned in a wealthy Texan home: couple photos and balloons, a stuffed paper mache ostrich and a box of stuffed white doves, and a large framed photo of their (probably prize winning) horse Bodacious. Large cushioned foot rests by a large sofa would serve as a collection spot for the actors to lounge and play on. 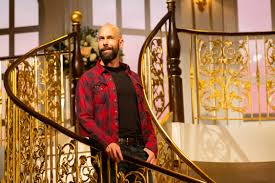 And right in the middle was a dazzling gold festooned curved staircase leading up to an ample second floor. Eight openings in the stage, up and down stairs and into the audience area, provided an enormous amount of flexibility for the performers, which served well as the action heated up and the exits and entrances became flights and chases.

The trouble is that the staircase blocked a lot of the action. Had it been far downstage it would have served the same purpose but not gotten in the way. There is nowhere in the audience where some of the action wasn’t obscured, no matter how clever the blocking for the actors. 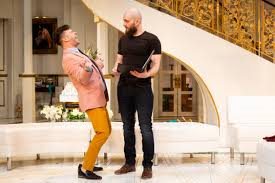 The mood throughout the play is slapstick humorous with a teensy touch of the sinister while promising that all will be well in the end – sort of like Noises Off meets Two Gentlemen From Verona. But nowhere in the play does the author or director prepare you for the sharp left turn into film noir, Agatha Christie territory it takes in the last five minutes. To its credit there is a Thornton Wilder touch of moralizing, tying Gene’s speech in the beginning to a warning about the inevitability of fate that comes, in one form or another, to us all – that we must be prepared because it can come when we least expect it. 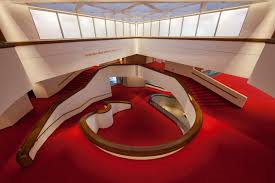 But in a turn as twisty as the elegant stairs in the Alley Theater itself, 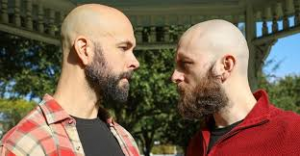 but more fitting to the middle of Deathtrap than the much lighter play The Carpenter leads us to believe it is, we suddenly jumped to the end of a far darker story. Kind of like finding out the comedian who you thought was playing a heart attack for laughs really — died. (Which actually happened to Dick Shawn).

But even this would have worked had the denouement occurred in the middle of the play with time to incorporate the event into the warp and woof of the story OR had there been any indication that one or the other of the brothers had had a darker past than was inferred. 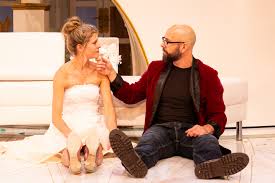 I, frankly, fully expected one more twist to rectify this contradiction in mood before blackout, but none came. Instead it was a payoff without adequate set up. 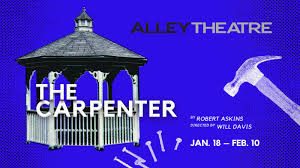 When you call something The Carpenter, especially when the main character wags on in a homiletic fashion, it is not unreasonable to expect a few Christian themes or at least a nod in that direction, but despite the backdrop of a marriage there was none. Even the ceremony was thrown at the couple by the bride’s best friend during a particularly ridiculous action scene as a dressed up civil ceremony with delusions of New Age druidism. 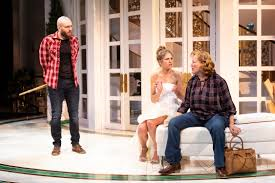 Then there’s Terry, the rich and indulged but confused and sweet fiancée who really only wants to love and be loved by Dan. But in the play’s final minutes, and without sufficient justification or provocation Terry goes from being like the loveable but ding batty Gracie Allen to Mrs. Lovett from Sweeney Todd.

The reaction of Venus, Gene’s stripper girlfriend, to the climactic scene is uncharacteristically, but plot conveniently, bland, exiting without real purpose, leaving us wonder where

the firebrand we initially met went.

While perhaps Mr. Askins is suggesting that we all wear masks under which are monsters, the transformation is unexpected, under prepped and jarring.

If it was supposed to be a comedy, the characters should have all received a certain justice. If a tragedy, then they all get some kind of comeuppance, even if that is death. But there was only a little of both and not enough of either to be satisfying.

There are also a LOT of “in-jokes” about Google in particular, the tech world in general and the current political scene, which will age very poorly. Granted, this kind of nod to a contemporary audience dates from Greek plays (Aristophanes’ ribald Lysistrata was written as a protest against what he saw as the waste of life in the Peloponnesian War), to Groucho Marx (Animal Crackers – whose song “Hooray for Captain Spaulding” was titled as a lampoon of a notorious Hollywood coke dealer). But where those classics used such frippery as decoration, throw-away lines which a modern audience can ignore and still enjoy the play, Mr. Askins leans so heavily on current events that ticketholders 20 years from now may be scratching their heads in confusion at half of the jokes.

The acting was fun as Gene and Dan imitated the mannerisms and eccentricities of each other, first in jest and sarcasm and latter in more earnest. Everyone else was a broad caricature: 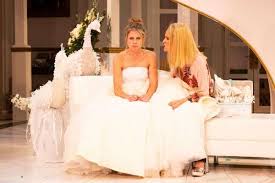 Terry, the Texan equivalent of a Valley girl, Claire her promiscuous best friend decked out like a walking fashion extravaganza, 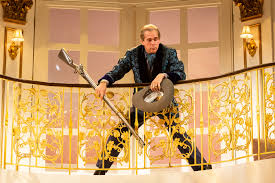 Kip as Terry’s rich Texas father drunkenly shooting at the ceiling with his ever present oversized rifle, 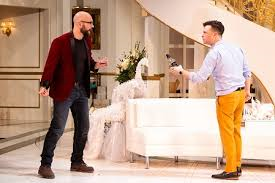 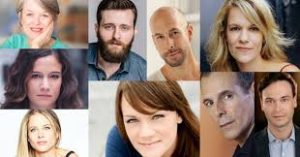 If I have mentioned a lot of other stories: Our Town, Noises Off, Sweeney Todd, Deathtrap, it is because this play feels more derivative that it should have. It is as though Mr. Askins did not have the courage of his fundamentally interesting convictions and hid behind a lot of references. That is a shame because I believe he had something fairly important to say – that life is short and death will one day come for all of us. But his heavy handed awkward treatment of this message got a bit ….. buried, if you’ll excuse the pun.

While I was glad I went and it IS worth the ticket price, I think Mr. Askins has promise but it was not completely …. nailed down… in The Carpenter.