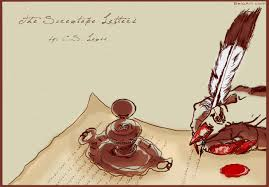 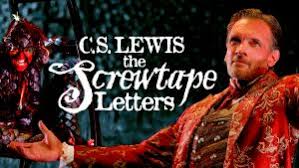 A fascinating one-man play based on the

C.S. Lewis’ book The Screwtape Letters – the letters from a senior demon to his nephew/student demon.

Anyone old enough to read and understand the source book: The Screwtape Letters. As a rule of thumb….13 years old and up. 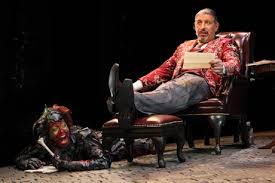 My husband and I spent a disturbingly delightful and entertaining 70 minutes with a demon the other afternoon. The demon’s name was Screwtape and he is the creation of one C.S. Lewis. Lewis is the author of the children’s Narnia series as well as deeply philosophical books like The Four Loves, science fiction like Out of the Silent Planet, religious apologetics like Mere Christianity, theological guides like The Problem of Pain and self-mortifying confessions like A Grief Observed.

Lewis was a prolific writer and a deeply committed, practicing Christian who made the long, arduous and painful, but soul fulfilling journey from casual Christian to atheist to devout believer. 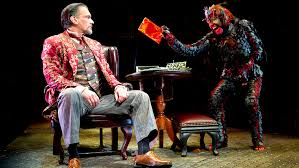 For those unfamiliar with the book, The Screwtape Letters is a precursor to the “found footage” movies so prevalent today but created for far more ennobling reasons. The preface to the book Screwtape warns of the dangers of either denying the existence of devils or, contrarily, indulging in an “unhealthy and excessive interest” in them. The first half of the warning reminds me of the line in The Usual Suspects by “Verbal” Kint who admonishes his listener that: “The greatest trick the Devil ever pulled was convincing the world he didn’t exist.” The latter half of the warning brings to mind a comment by C.S. Lewis that this book was the easiest for him to write but also the one that made him most uncomfortable – so much so that he resisted the urgings of his publisher and the general public to write a sequel. He did, some years later, write a short piece entitled Screwtape Proposes a Toast, which, in a condensed version opens the play.

In any event, C.S. Lewis in his preface to Screwtape Letters, states he will not explain how these letters “fell into my hands”. Suffice to say they are a collection of correspondence between Screwtape, a senior demon in Hell, to his nephew/student/lesser demon, Wormwood. In these letters Screwtape attempts to instruct Wormwood in the fine art of seducing a soul (referred to as his “patient”) away from “the enemy” (God) to be food for the denizens of Hell. 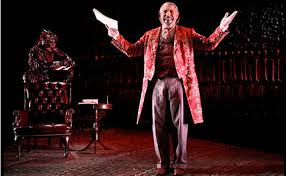 During the course of his instructions, Screwtape exposes many of the subtle fallacies and self-delusions to which people who call themselves atheists, as well as those who think of themselves as Christians, can fall prey (my choice of phrase here both gruesomely punny and deliberate).

One would not think that a one-man play dramatizing what amounts to a series of theologically themed short essays could be either interesting or funny. But this play is both. This is a credit to both the wry, dry wit of Mr. Lewis as well as the construction of the play itself. The set is fairly sparse, creating the allusion to a well-to-do Englishman’s smoking room, (smoking – like brimstone. See what I did there?), with two unusual additions. One customization is the twisting ladder which reaches up to the ceiling upon which one can climb to retrieve and send posts via an attached pneumatic tube. 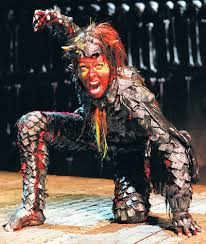 The second inclusion is of Screwtape’s wordless, androgynous assistant demon, Toadpipe, who, in the production we saw, is costumed like an evil Papagano from Mozart’s The Magic Flute, all in artificially colorful feathers from head to toe. He/she has no lines but grunts and growls and pantomimes his/her obsequiousness and occasional little mutinies. 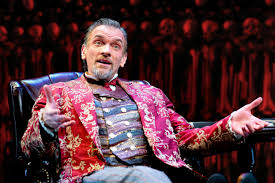 The performance was riveting, compelled as we are to breathlessly await the determination of whether the man about whom they communicate will succumb to Wormwood’s ministrations or successfully resist the abyss of Hell. 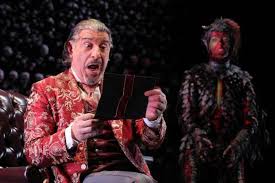 There is an interesting tension created by Lewis, in that the protagonist, the one with whom audiences, in the overwhelming majority of plays, are naturally manipulated into sympathizing, is a demon from Hell. 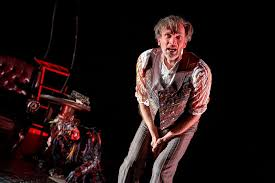 Resisting the impulse to root for Screwtape, as the protagonist of the tale, is similar to the same pull of temptation which each of us must continually struggle. This odd conundrum reminds us how easy it would be to find ourselves in the clutches of a Wormwood – or that we might already be in this danger. Fortunately, in Screwtape’s commentaries on his increasing frustrations with the failures of his nephew, we are also shown how to extricate ourselves.

We saw Screwtape at the beautiful 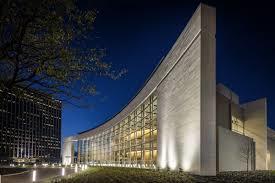 Jeanette and LM George Theater in Houston, but it is only playing through March 17, 2019. However,  it will be playing at many future theaters to come and you should catch it when you can. OR a community theater in your locale should contact the Dramatic Publishing Company and see about performing it. 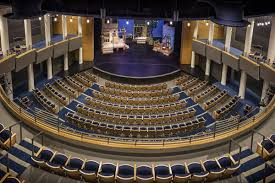 In addition, I must compliment the A.D. George Theater whose self-proclaimed mission is:

To produce compelling theatre, from a Christian world-view, that engages a diverse audience.

Screwtape was our first experience with this theater and it promises to most definitely NOT be our last.

BRAVO to the George Theatre and C.S. Lewis! 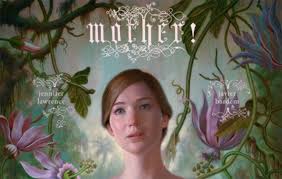 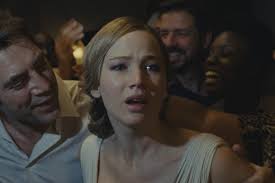 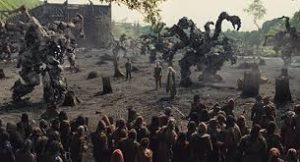 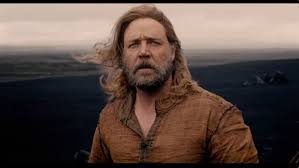 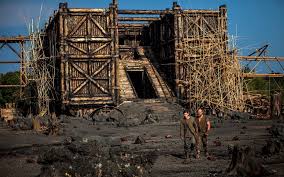 LONG TAKE: Having seen Darren Aronofsky’s unusual and creative but theologically sound Noah, I had hopes that the rumors Mother! was a Biblical metaphor would play out and that the grosteque brutality I had also heard tell about would be justified.

I was disappointed…and more than a little shocked. Rex Reed savaged it as the worst movie of the century, calling it a "delusional freak show…of pretentious twaddle." I wouldn’t go that far, but even reading two synopses in advance I found it hard to watch.

There have been a lot of movies which allege to "interpret" the Bible but which mishandle, mangle and demonstrate a lack of understanding of the Bible in general and Judeo-Christian theology in particular. Some are Dogma, Paul, Michael, Legion, and pretty much anything written by Dan Brown. Some are merely misguided, some just foolish, and some viciously biased anti-Christian propaganda.

To give the benefit of the doubt to Mr. Aronofsky, and because of his Noah, I like to think Mother! falls under the sincerely meant but ignorantly misguided category. It is my understanding that Aronofsky attempted a metaphorical telling of the entire Bible, from pre-Genesis to the Apocalypse and, for a little while, he got it right.

The premise has an almost Thorton Wilder – Skin of Own Teeth feel and made me think it might work better as a play. 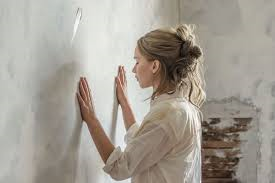 The story is about a never named young Woman (Jennifer Lawrence), deeply in love with her also never named older Husband (Javier Bardem), living in the quiet pastoral countryside in a charmingly creaky mansion that might have, at one time, been a farm house or even minor plantation. The Husband is a once famous writer with block and both patiently wait for his inspiration to happen again. 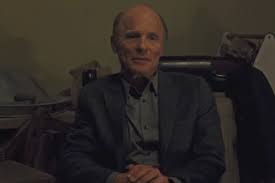 his boozy prickly wife (Michelle Pfeiffer). The Woman wants them out but the Husband wants them to stay. 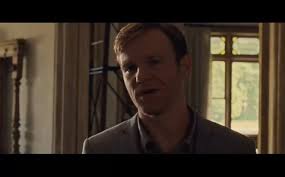 The sons of the guests show up (played by real life brothers Domhnall and Brian Gleeson), fight over the coming inheritance and one kills the other then flees but not before demonstrating the mark of Cain on his forehead in his brother’s blood.

Up to this point I get it. 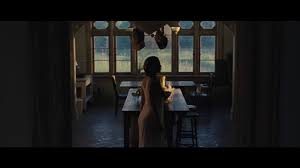 The idyllic scene is Paradise. 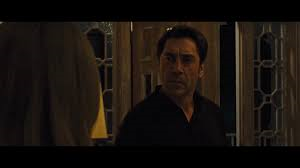 Bardem is the Creator whose very Words will fill their world with life. 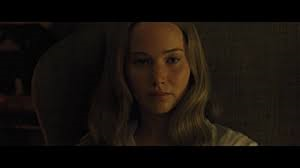 Lawrence is the paradigm for Mary. 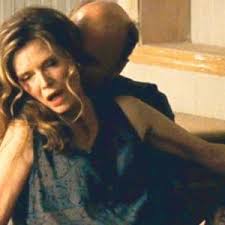 Harris and Pfeiffer are Adam and Eve – Harris brings death in the form of cigarette smoking and his own disease. Pfeiffer represents the vices of lust, uninhibited behavior, spite, and vengefulness. Their sons are, obviously, Cain and Abel. And up to this point, if you are prepared for this vision, it plays out as an interesting allegory. Had Aronofsky kept to the Biblical themes it might have been a great film. But it is at this point his theological symbology train goes off track.

God is love and desires obedience of His Creations but does not NEED love or adoration the way the Husband does. If Lawrence is playing Mary then she would not be clueless about the arrivals to her house, nor scream at "God" nor slap Him nor tell him no. As difficult as we humans all are, Mary is our adopted Mother. While she might be grieved at our condition, she would not try to bar us from her house – this is if we are keeping to the theology from which Aronofsky is supposedly dipping his ladle. And the linchpin of all Creation is that Mary told God "yes" in ultimate obedience to Him – "Mary said, 'Behold, I am the handmaid of the Lord. May it be done to me according to your word.'”  Luke 1:38.

By the end of this very odd film, 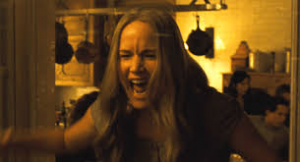 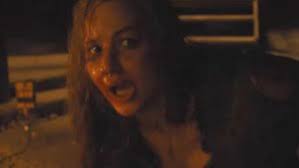 Aronofsky’s Woman is more Kali, Hindu goddess of destruction and sexuality than Catholic Blessed Virgin Mary, Mother of Jesus our Savior and Prince of Peace. By Aronofsky's own admission Lawrence's character is a "Mother Earth" figure, which druidic reference is completely inapproriate to a movie with all the Judeo-Christian themes and symbols. This inclusion alone exposes the glaring errors in Aronofsky's vision.

Bardem is more like one of the Roman gods who craved worship and "needed" the love of others to thrive and be creative. In Christian theology, God is not the greatest among creations, yearning for approval and recognition, but is entirely outside of creation, being Creation Itself, and requires nothing from us – any more than a painter requires anything from his painting. But in Aronofsky’s misguided understanding of the Bible he seems to see God as suffering from creative entropy until he has one really good night with his wife and is greeted by a crowd of adoring fans. He is more admiration addicted rock star than God of Jacob, Joseph and Issac.

And, frankly, Aronofsky’s interpretation of the sacrifice of Jesus had me running to take a judiciously timed bathroom break. Again, Aronofsky's version is theologiocally unsound as Jesus was more than full age of consent and knew exactly what He was doing, what was being done to Him and why. He was not an unwilling infant martyr to a misguided divinity’s misplaced trust in his groupies.

Mother!, to borrow from a What Culture evaluation, is really only for film students and critics. It is a study in art house script writing which might have risen to masterpiece had Mr. Aronofsky had a firmer grasp of the theology he was supposedly analogizing. Instead it comes off as the violent musings of a gifted high school videographer who didn't pay enough attention in Bible study but only vaguely, and without context, remembered all the gory bits.