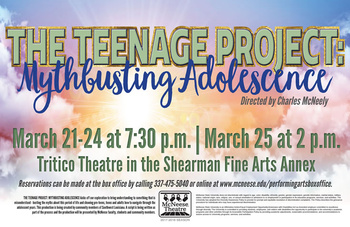 To paraphrase Dumbledore from the first Harry Potter movie, it takes courage to reveal your innermost secrets to your friends, but it takes even more courage to reveal them to strangers for the benefit of others. And this is what the young people in the play The Teenager Project: Mythbusting Adolescence do. A distillation from personal and third-party real life experiences of young people from 12 to 21 years of age, The Teenager Project bares its soul to its audience in painful and sincere expose. The authors are the performers with contributions from the director, Charles McNeely, who, for the purposes of this play wryly self-describes as a "58 year old former adolescent".

Mr. McNeely points out these are experiences to which we can all relate, either from first hand or from stories we've heard.

The premise of the play is to bring into the open the personal crises, angst, anxieties, doubts, fears, and conflicts which happen to the average child as they transition from adolescence to adulthood.

They creatively approach the topic from a variety of scenarios, as: a courtroom drama, a research lab, a therapist office, and a variety of interactions with parents in disciplinary situations. One of the most amusing scenarios was one of the "how to and not to" discipline, as perceived from the teens' POV. Based upon the reactions of the young actors who we met after the play, I believe the young people were surprised by the approving laughter from and relatability the parents in the audience had to, the tough-talking mother to her wayward son.  I suspect the stern mom was supposed to be the "how NOT to" from the kids' point of view. However, the adults in the audience recognized the wisdom and constructivity of the stricter more disciplinary approach. So, as the teens sought to inform us, through the  wisely intentional interactiveness of the play, the teens found themselves learning as well.

This disjunct between what the actors expected and what they got in the adult audience reaction was a charming example to me of the genuineness of the young writers' efforts to convey the dis-communication between the parental authority figure and the child. This becomes especially keen when one considers that, aside from the judiciously limited input from the adult director, the play was primarily written by children who have no parental experience. In short, the adults in the audience have been both sides of that fence. The young people have not but have honestly opened their hearts and minds to let us know what they are thinking and feeling.

This play is for everyone. Aside from a few inappropriate uses of the name of God as an interjection, although not as a profanity, there is no bad language. There is no inappropriate sexuality and no violence. I would note though that as the topic would be of little interest to the very young, they might get restless and bored, though there is nothing in the play that the young should not see.

My only concern with the content is that there was too little emphasis on theological solutions and not much by way of the adult perspective. It seems as though the instinctive response of the young people was to resort to secular therapy. None went to seek guidance, specifically, from a priest or pastor or rabbi.

The play did clearly display the inherent and natural inclination of youth of that age to perceive the world as revolving around them without the understanding that a broader, more altruistic worldview, and an adherence to a more God centered life might go far in a way to resolving many of their issues.

The director, Charles McNeely, innovatively chose what he terms a "devised" style of writing, which is not a script, but written in almost vignette form from real life experiences and based upon topics which the writers / actors thought important. With that insight, it occurs to me that The Teenager Project could be First Act in a broader scoped "Human" Project Trilogy. In this First Act they have creatively and thoroughly presented us with the problem. Perhaps a Second Act could present the adults' point of view to the same scenarios. And the Third Act could be a collaborative effort to achieve some resolution, solutions, understanding, communication and perhaps at least a detante between the two "warring" generational  factions.

Having seen this bold and fresh approach, I very much  look forward to seeing what the talented and insightful Mr. McNeely has in store for us in the future with his gifted troupe of young actor/writers.

The play is showing at the Sherman Fine Arts Theatre on the McNeese Campus through this Sunday, March 24th. 7:30 evening performances and at 2 pm Sunday matinee. Tickets can be purchased online here

One thought on “THE TEENAGER PROJECT: MYTHBUSTING ADOLESCENCE – A BOLD THEATER EXPERIMENT”